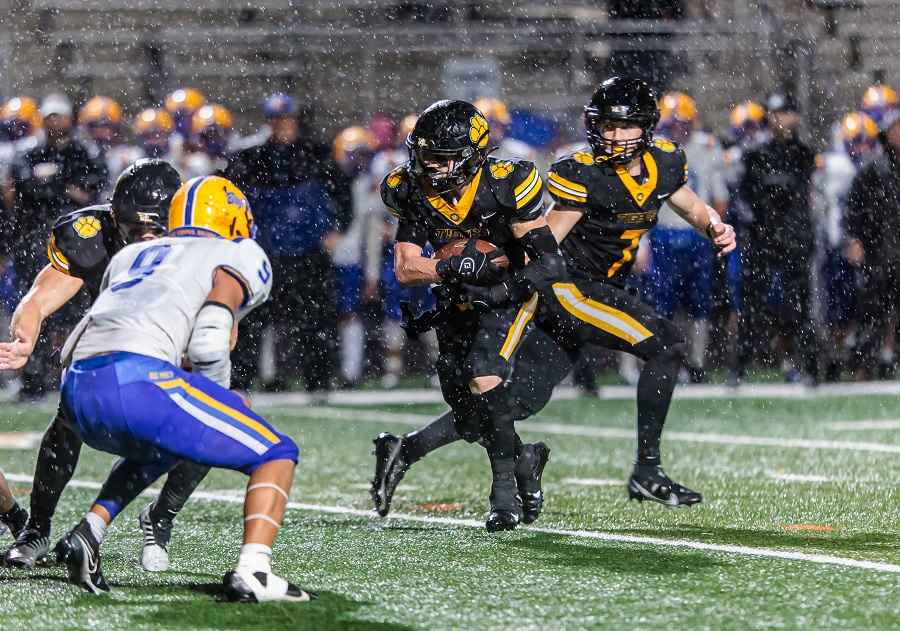 Tigers Slosh Their Way Past Big Macs In WPIAL Semifinals, 7-0

North Allegheny advanced to the WPIAL Class 6A championship game for the second time in the last three seasons with a 7-0 win over Canon-McMillan on Friday night at Newman Stadium. The NA defense posted its second shutout of the season and limited the Big Macs to just 43 total yards of offense. It’s the sixth time this season the Tigers have held an opponent to seven points or less in a game.

Playing in a steady downpour throughout the night thanks to remnants of Tropical Storm Nicole, neither team could muster much offense and the game remained scoreless through three quarters. The Tigers rushing attack finally wore down the Big Macs in the fourth quarter and put together what proved to be a game-winning drive.

With 9:55 remaining in the game, North Allegheny embarked on an eight-play, 79 yard-march. The Tigers rushed the ball seven times on the drive, sparked by a 26-yard jet sweep by junior Khiryn Boyd to the CM 30-yard line. A personal foul on a late hit by the Big Macs, advanced the ball another 15 yards to the CM 15-yard line. Following another Canon-McMillan penalty, senior running back Andrew Gavlik carried the ball nine yards to the Big Macs 1-yard line. From there, senior quarterback Logan Kushner toted the football into the end zone for his sixth rushing touchdown of the year and a 6-0 lead with 6:44 remaining in the game. Kicker Peter Notaro tacked on the extra point for a 7-0 advantage. Gavlik had five carries on the drive for 26 yards. He finished with 28 rush attempts for 98 yards on the night.

The North Allegheny defense forced a three-and-out on Canon-McMillan’s next possession and that was the last time the Big Macs saw the football. The NA ground game churned up the final 5:03 off the clock enroute to a 7-0 victory and a trip to the WPIAL Class 6A championship game.

Allowing a scant 43 total yards to the Big Macs, the Tigers defense also forced two turnovers in the game, including a fumble recovery by Cameron Chmura on the first play from scrimmage and a first half interception by Boyd, his sixth of the year. It’s the most interceptions by a Tiger since Joey Porter Jr. intercepted seven passes in 2017. Junior defensive end Daniel Sellers led the team with eight tackles, including three for a loss, and was named the Wright Automotive Player of the Game. Also notable, junior Aidan Buggey posted seven solo tackles, four for a loss.

With the win, North Allegheny improves to 10-1 on the season, while Canon-McMillan’s year comes to an end with a 5-6 mark. The Tigers will take on Central Catholic on Saturday night at Norwin High School in the WPIAL Class 6A championship.