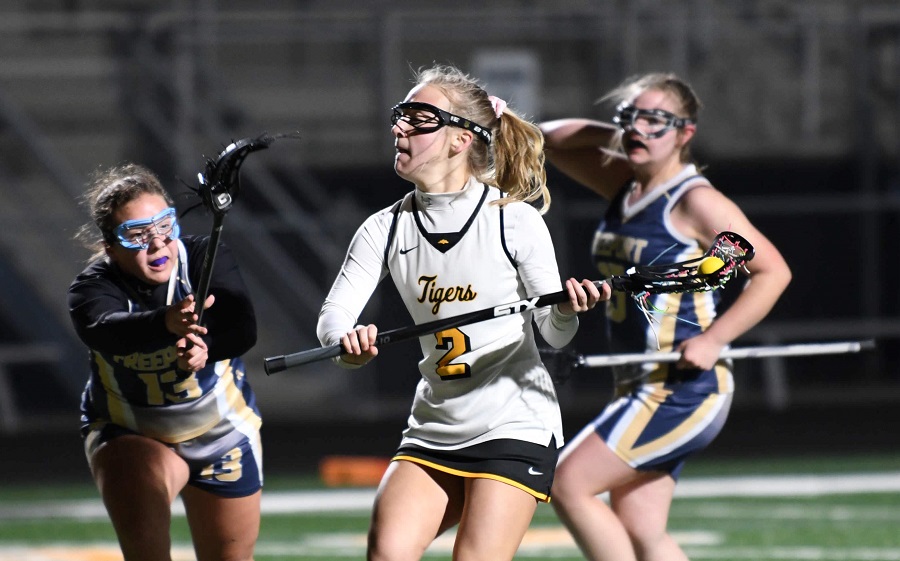 The North Allegheny girls’ lacrosse team earned its first victory of the season in convincing fashion with a 21-2 triumph over the Freeport Yellow Jackets on Thursday night at Newman Stadium. The Tigers scored the first 16 goals of the contest and cruised to the victory with the wind at their sails on a breezy night in Wexford.

The North Allegheny offensive showcase was led by senior Bella Falo, who scored a team-best five goals and earned Wright Automotive Player of the Game honors. Falo tallied a first half hat trick to help the Tigers to a 16-1 lead by intermission. Through three games, Falo paces the team with 11 goals on the young season.

Sophomore Isla Abrams posted a hat trick with a trio of goals and was 6-for-9 draws on the night. Junior Sofia Mianzo also was 6-for-9 on draws and junior Rebecca Oates won 5-of-6 draws taken. Mianzo and Oates added one goal each on offense. Oates and junior defenseman Hailey Regule tied for the team lead in ground balls with three apiece. Sophomore goalie Izzie Trunzo picked up the win in net.

In all, 13 different players scored for the Tigers, including junior Mila Prusak and sophomore Kelsea Apel with two markers each. Also touching the scoresheet were Amelia Henderson, Avery Anderson, Ava Lindsay, Leigh Failla, Madelyn Lemmon, Laurel Donley and Maya Evans, who all scored on goal each. Evans finished with a four-point night, contributing three first half assists.

Following the blowout win, North Allegheny improves to 1-2 overall and 1-1 in section play. Freeport falls to 0-2 in Section 2-AAA. The Tigers will visit Shaler on Friday night at 7:30 p.m.