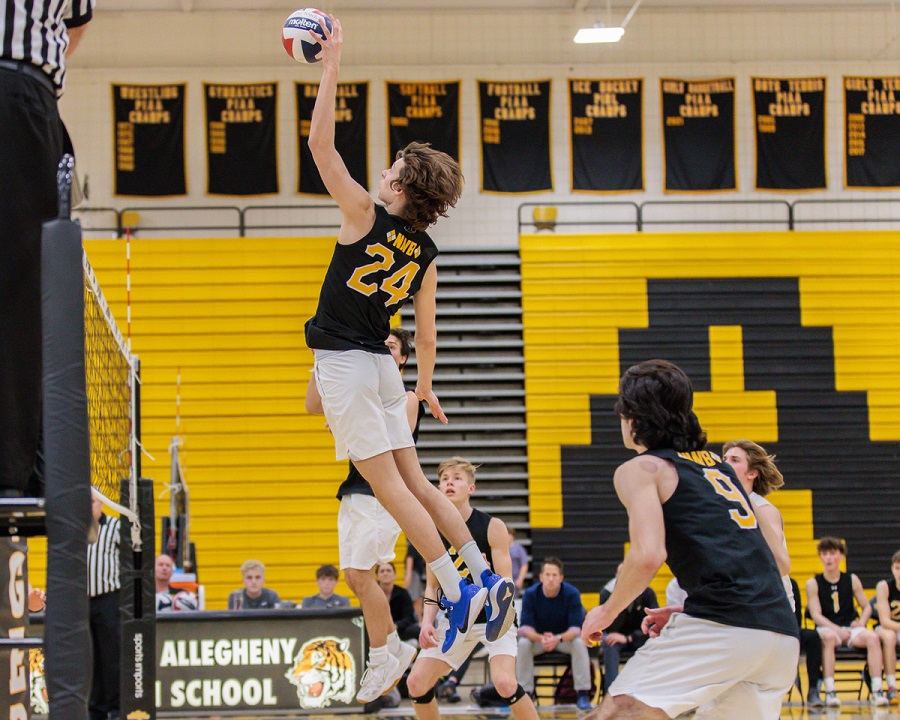 The North Allegheny boys’ volleyball team picked up its 68th consecutive victory on Thursday night with a 3-0 win over Butler. The Tigers earned the section sweep by set scores of 25-7, 27-25 and 25-7.

Junior outside hitter Jax Wilhite set the tone in the opening set with a pair of blocks in the early going and junior Nico Sfeir hammered out two kills as NA jumped to an immediate 12-1 lead. Junior Varun Kaveti posted two of his four kills on the night in the first set to help North Allegheny cruise to a 25-7 win.

Set two was a far different story as Butler put NA to the test and held a 23-20 and 24-22 lead. The Tornado were paced in the set by sophomore Coleton Welter with three kills and Thiel College commit Kaleb Proudfoot posted two kills and two blocks. Despite the late deficit, North Allegheny took seven of the final nine points to steal away a 27-25 win. Senior setter Caleb Schall spearheaded the rally with two kills and two blocks.

The third set was identical to the first and North Allegheny controlled the action enroute to a 25-7 victory and sweep of the Golden Tornado. Senior middle blocker Jack Birch was a consistent force for the Tigers throughout the night and finished with team-high nine kills and was named the Wright Automotive Player of the Match.

With the win, North Allegheny improves to 3-0 in Section 2-AAA and Butler falls to 2-2 in section play. The Tigers will next take part in the York Invitational on Saturday.