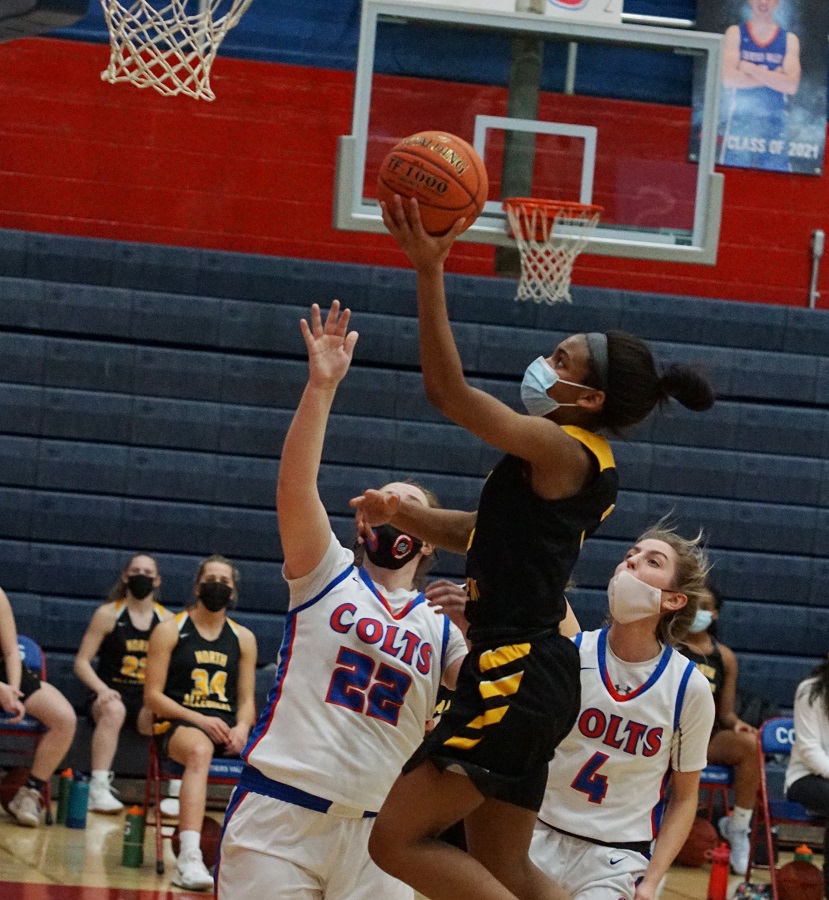 Photo by Will McBride

In the first quarter, Chartiers Valley came out with a ton of energy on their home court. The offense was flowing for the Colts and the 3-pointers were falling. Lizzy Groetsch kept the Tigers in the game, putting up seven in the quarter and it was 18-11 in a very fast paced opening frame. Quarter number two was the Tigers turn to counter punch with a late 8-0 run to tie the game, 29-29, at the half.

Coach Spencer Stefko made some great halftime adjustments and North Allegheny started the second half on a 9-2 run giving the Tigers a 38-31 lead. They would stretch the lead to 11 at one point but Chartiers Valley was able to pull it back to single digits heading into the fourth quarter with the score 50-41.

Chartiers Valley made a push in the fourth quarter, cutting the lead all the way down to one possession at 56-54 when Kellie McConnell hit a huge three pointer to give the Tigers a 59-54 lead. The Colts got a quick 2-pointer to make the game 59-56 and then get a steal. Following a Chartiers Valley timeout, junior Aislin Malcolm took a 3-point attempt to tie the game but it was blocked by Groetsch. Jasmine Timmerson quickly grabbed the rebound and hit one of her free throws to make it a 60-56 game. The Colts connected on a 3-pointer by Perri Page to make the game 60-59 but a great inbounds play drawn up by Coach Stefko got McConnell to the line where she would hit 1 of 2 and then steal the inbounds pass for the Tigers to secure the 61-59 victory.

Timmerson led the Tigers with 18 points. Groetsch had 13 points while McConnell and Emma Fischer each had 11 points.

North Allegheny improves to 13-0 overall. Chartiers Valley falls to 13-2 overall. North Allegheny’s win streak is up to 27 games which is now the longest active win streak in the WPIAL. Quick turnaround for the Tigers as they will play their third game in three days tomorrow when they host Baldwin at 3:30 p.m. This game and the JV game at 2 p.m. will be live-streamed on the North Allegheny Sports Network.