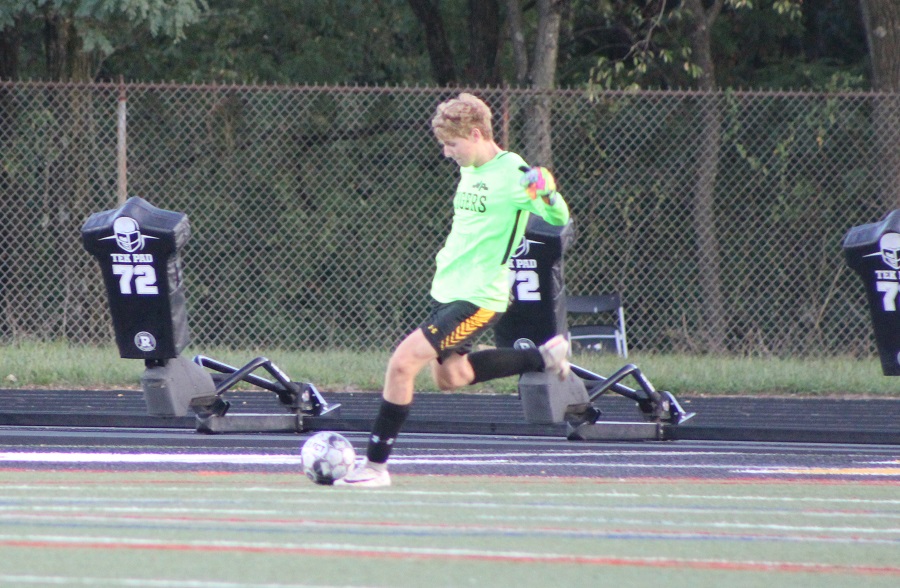 Tigers Take Down Dragons In WPIAL First Round, 5-1

For the second time in the span of a week, the North Allegheny boys’ soccer team defeated the Allderdice Dragons. On Tuesday night in the WPIAL Class AAAA first round, the sixth-seeded Tigers delivered a 5-1 victory against the 11th-seeded Dragons on the strength of another two-goal performance from senior Jonathan Swann. He did the same in last week’s 5-2 triumph in the regular season finale and once again earned Wright Automotive Player of the Game honors.

It was Swann’s first goal of the night, a coast-to-coast break through the Allderdice midfield and defense with 16:17 to play in the first half, that gave North Allegheny a 1-0 lead. The Tigers added on with 9:27 remaining in the half when Sean Moore drove a free kick into the box that Evan Anderson headed into the net for his team-leading 15th goal of the season and a 2-0 lead.

Late in the first half, Allderdice seemingly gained some momentum on a goal by Robert Phelps just 47 seconds before intermission to trim the Dragons deficit to 2-1 going into the break.

The Allderdice momentum was short-lived, however, as the Tigers stormed out of the gates 1:19 into the second half on Swann’s second goal of the night for a 3-1 advantage. From that point on, North Allegheny had decided control of the game and tacked on two more goals to cap the win. With 13:02 remaining, sophomore Ben Christian scored his first career varsity goal for a 4-1 lead. Senior Kensly Owens finished off the victory with a marker, his 14th of the year, with 7:28 to play to bring the final score to 5-1, Tigers.

Tuesday night’s game marked the seventh meeting between the two teams since Allderdice joined the WPIAL for boys’ soccer in 2012. In all seven contests, the Tigers have come away victorious, including another WPIAL opening round win in 2014.

The win improves North Allegheny’s record to 13-3-1 on the season, while Allderdice ends the year with a 5-6-1 record. The Tigers advance to the WPIAL Class AAAA quarterfinals with a visit to Norwin to face the third-seeded Knights on Saturday at noon. The game will be broadcast live via the internet on the North Allegheny Sports Network.