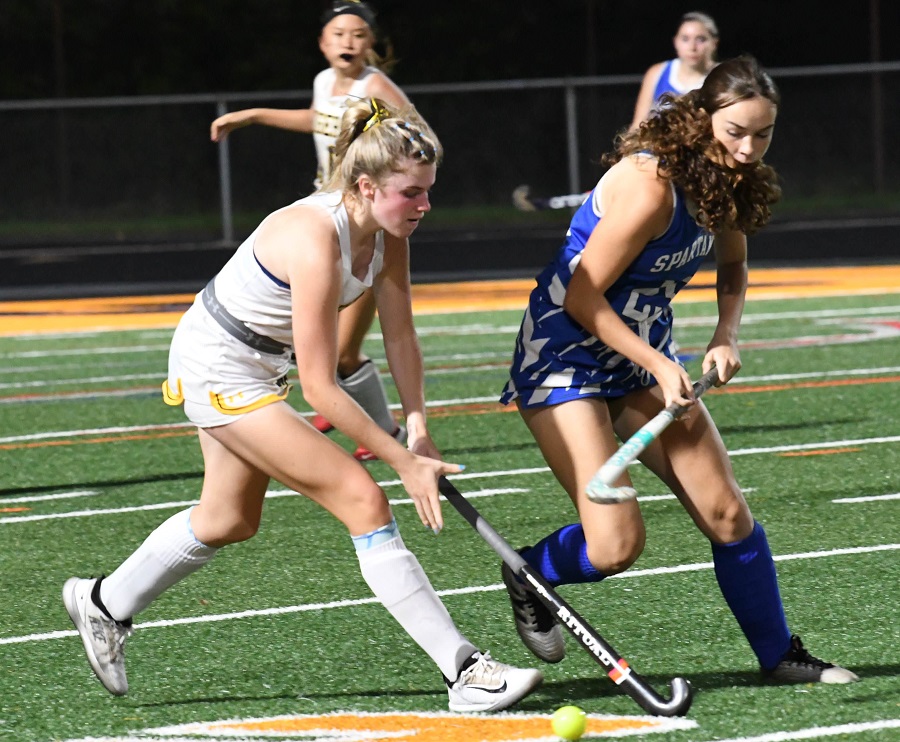 With a complete team effort, the North Allegheny Tigers played “together” on Thursday night for a 4-0 shutout of the Hempfield Spartans in Section 1-AAA action. Fashioning new shirts with the 2021 team motto of “together” during pregame warmups, the Tigers indeed played as one unit for an important section victory.

North Allegheny faced an upstart Hempfield squad that recently earned impressive wins over Mt. Lebanon and Peters Township, a pair of playoff qualifiers from the year prior. While the visiting Spartans were riding high entering the contest, the Tigers brought their opponent back down to earth with an immediate goal in the first three minutes of the game. With 12:20 on the clock in the first period, North Allegheny junior forward Mila Prusak scored on a penalty corner for an early 1-0 lead.

While North Allegheny owned the better of the play in the remaining minutes of the first half, the score remained 1-0, Tigers, at intermission.

In the second half, the Tigers gained a firm hold of the contest with a three-goal outburst to bury the Spartans. As she did in the first quarter, Prusak opened the scoring just 2:50 into third quarter by tipping in a shot on a penalty corner for a 2-0 lead. The goal was Prusak’s third of the season. Tigers were 2 for 9 on penalty corners on the night.

North Allegheny’s persistent pressure continued with 7:33 left in the quarter when junior Sofia Mianzo found fellow junior Lauren Kampi, who deflected a shot into the Hempfield net for a 3-0 advantage. A catalyst and facilitator for the NA attack throughout the night, Mianzo was selected as the Wright Automotive Player of the Game.

Not done yet in the third period, North Allegheny tacked on another goal when Kampi was issued a penalty stroke with 5:48 left in the quarter. Kampi beat Hempfield goalie Shannon Lutz with a high-velocity laser on the stroke, her third marker of the season, increasing the NA lead to 4-0.

With a long-strike approach, Hempfield managed to earn 10 penalty corners but came up empty on every one of them. North Allegheny junior goalie Jordan Ashbaugh, who missed the last two games against Peters Township and Penn-Trafford, returned to the lineup and earned her second shutout of the season with five saves on the night. Senior defenseman Concetta Bochicchio, who missed the last game as well, returned to help solidify the back line and NA closed out a 4-0 victory.

North Allegheny leaps to 2-3 overall and 2-1 in Section 1-AAA, while Hempfield slips to 2-2 in section play. The Tigers will host Magnificat (OH) in a non-section affair on Saturday at 2:00 p.m.