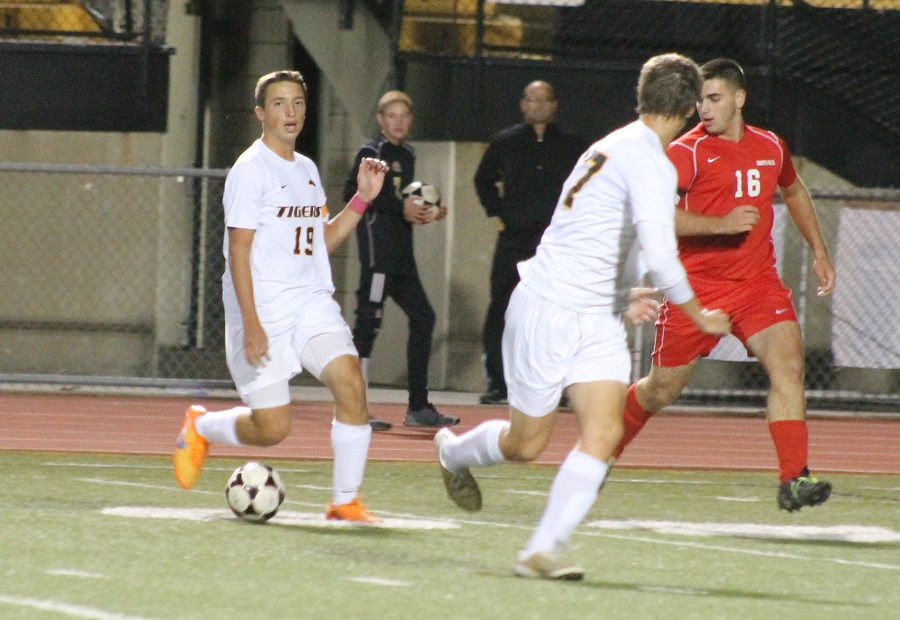 In the Section 2-AAA finale, the North Allegheny Tigers played the rival North Hills Indians to a 0-0 tie on Thursday night at Newman Stadium. The contest was a physical and defensive struggle that epitomized the neighborhood rivalry between these two schools.

With the two teams having already locked up playoff berths, North Allegheny still had an outside chance at a section crown with a win against North Hills coupled with a Seneca Valley loss at Butler, but as it turned out neither occurred.

North Allegheny had its best scoring opportunities in the first 10 minutes of the game and came inches away from scoring on a shot by Alex Gill that was denied on a tremendous leaping save by North Hills goalie Nick Colicchie. North Hills settled into the game following North Allegheny’s opening salvo and most of the contest was played in between the 30’s.

Like North Allegheny, the Indians’ best scoring chance came in the first half. With about two minutes remaining before halftime North Hills sent a free kick into the box that skipped off the fingertips and behind NA goalie Josh Krassenstein.  Fortunately for the Tigers, senior Nick Thornton backed up the play with a fantastic defensive save and cleared the ball away from danger.  A defensive stalwart all game long, Thornton was named the Wright Automotive Player of the Game on senior night by the North Allegheny Sports Network.

In the second half and in the two overtimes, neither team could manage a true quality scoring chance as the game ended in a scoreless stalemate. North Hills outshot North Allegheny, 7-6.  The Tigers led in corner kicks, 4-2. Despite the tie, North Allegheny posted its eight shutout of the season.  North Hills’ net minder Nick Colicchie notched his fourth consecutive shutout.

The top-ranked Tigers extend their unbeaten streak to 13 consecutive games and sit at 11-1-3 overall and 8-1-3 in section play. North Hills is 9-5-2 overall and 5-5-2 in Section 2-AAA. North Allegheny hosts Norwin in a non-section tune-up game on Monday at 7:45 pm.