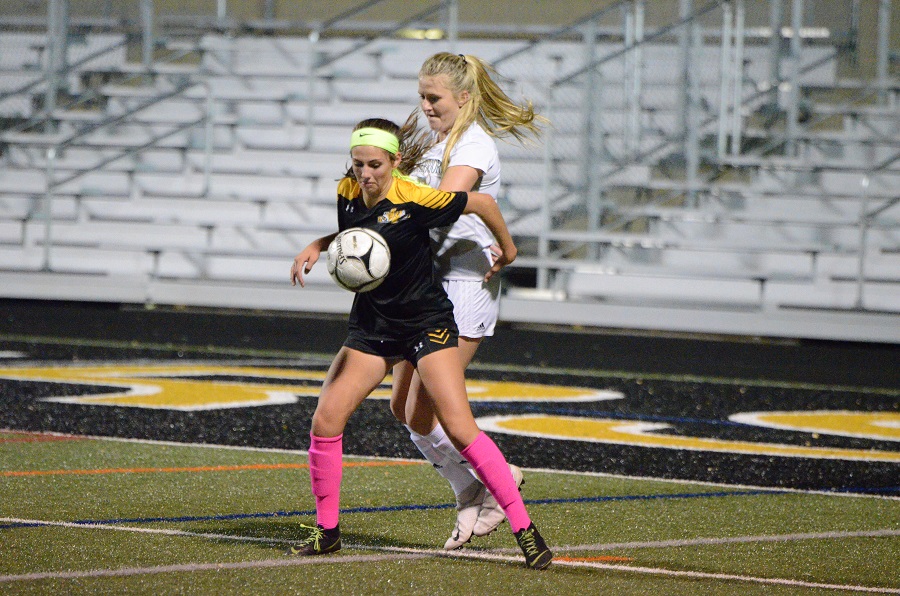 The third-seeded North Allegheny girls’ soccer team advanced to the WPIAL semifinals for the second time in the last three years with a 3-0 shutout of the sixth-seeded Penn-Trafford Warriors on Thursday night from Newman Stadium. The shutout was the seventh of the season for goalie Madison Vukas and the NA defense.

North Allegheny rolled through regular season and lost only two non-section games all year. One of those two losses was to Penn-Trafford back on Sept. 9 by a 3-0 decision.

Following a first-round bye, the Tigers were chomping at the bit and started fast in Thursday night’s rematch with the Warriors. Just 1:30 into the contest, senior Emma Bundy nearly gave NA the early lead but was denied on great diving save by Penn-Trafford goalie Megan Giesey.

North Allegheny had the better of the field play throughout the first half, but Penn-Trafford had a golden opportunity to grab the lead with a free kick that was taken by Sarah Nguyen with 20:00 to play before halftime. From 25 yards out, Nguyen’s kick struck the crossbar and bounced away, keeping the game scoreless.

Following the near-miss by Nguyen, North Allegheny took a 1-0 lead just minutes later when Riley Miara sent a crossing pass to senior Ava Ruppersberger, who buried a shot into the PT net for her seventh goal of the season. Ruppersberger was named the Wright Automotive Player of the Game by the North Allegheny Sports Network.

North Allegheny outshot Penn-Trafford, 12-3, on the night and led in corner kicks, 6-0. With the field tilted in NA’s direction, Giesey did a tremendous job of keeping Penn-Trafford within striking distance for much of the night. Along with her great save on Bundy early in the contest, she made another diving stop on Sarah Schupansky with 2:45 remaining in the first half.

With 22:50 on the clock in the second half, Penn-Trafford again caught a break when freshman Lucia Wells had a shot deflect off the right post and away, keeping the score, 1-0, Tigers.

NA was finally able to score the elusive second goal of the night courtesy of junior Ellie Wrigley, who tallied her second marker of the season with 15:11 to go in regulation for a 2-0 lead. With 4:16 remaining, Schupansky got loose for a breakaway and beat Geisey one-on-one for a 3-0 lead. The goal was Schupanksy’s team-leading 20th of the year.

The win improves North Allegheny’s record to 15-2-1 on the season, while Penn-Trafford concludes its season with a 12-7 record. The Tigers advance to the WPIAL semifinals to face the Peters Township Indians on Monday night at a site and time to be determined. The game will be broadcast live via the internet by the North Allegheny Sports Network.