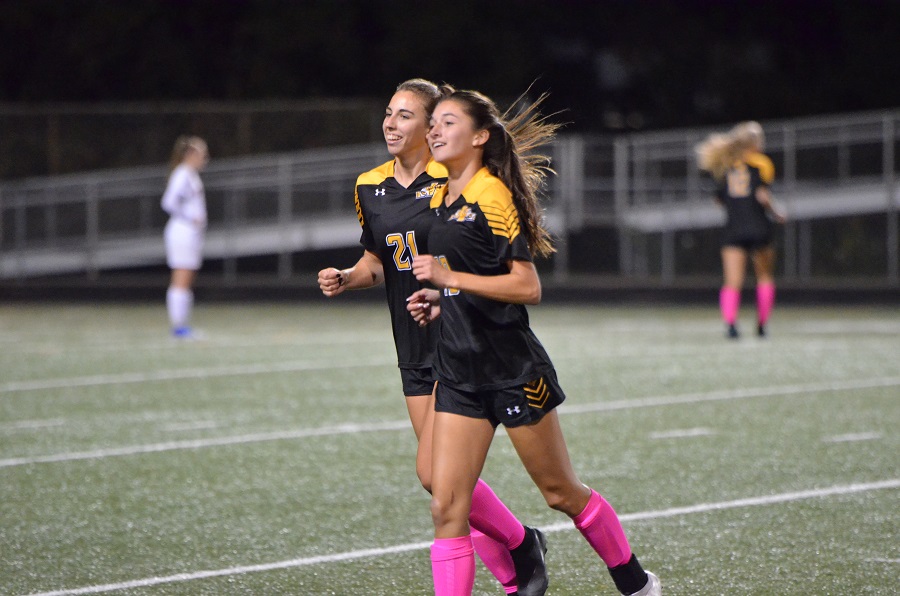 For the first time in program history, the North Allegheny girls’ soccer team finished with a perfect section record and closed out the regular season with a dominant 8-1 win over North Hills on Monday night. Senior Riley Miara and junior Sarah Schupansky each netted a pair of goals to help the Tigers cap the season with a 12-0 mark in Section 1-AAAA. For her efforts, Miara was named the Wright Automotive Player of the Game by the North Allegheny Sports Network.

The Tigers outshot the Indians, 16-2, and led in corner kicks, 5-0. With the black and gold dictating the pace, North Allegheny poured on the goals for the second-highest scoring output of the season.

Schupansky opened the scoring with 31:25 to play in the first half with a goal from 15-yards out to put the Tigers in front, 1-0. Freshman Lucia Wells lofted a shot over the North Hills goalkeeper from 20 yards out for a 2-0 lead. Freshman Anna Bundy ended the first half scoring with 3:26 on the clock to give NA a 3-0 lead at intermission.

The North Allegheny offense scored four times in the first 10 minutes of the second half to leave little doubt of the outcome. Miara scored twice and Schupansky added her second of the game during NA’s opening salvo to start the half. Senior Emma Bundy added a goal and freshman Allie Burns capped the scoring with 8:13 to play for NA’s eighth and final goal of the evening. North Hills managed to break the shutout against the NA reserves with a goal by Miranda Groll as the Tigers claimed an 8-1 victory.

The win gives North Allegheny a 14-2-1 overall record. North Hills falls to 2-12-1 overall and 1-11 in section play. The Tigers will await the unveiling of the WPIAL playoff bracket, which will be released on Wednesday.