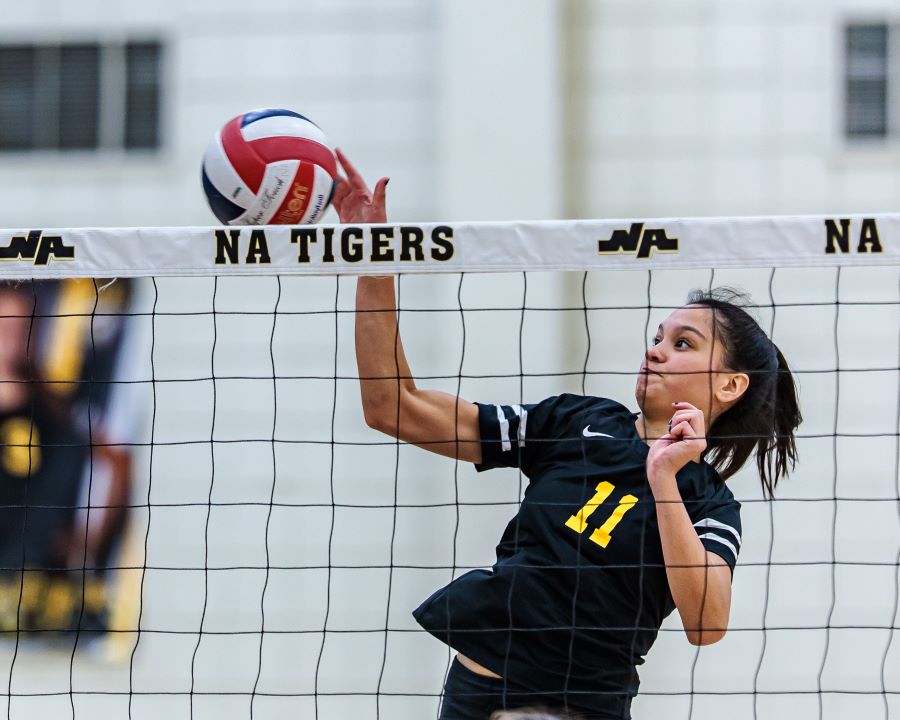 Two of the top teams in the state dueled on Monday night in an exciting non-section contest and the North Allegheny girls’ volleyball team defeated the North Catholic Trojanettes, 3-0. The five-time reigning PIAA champions in Class AAAA defeated last year’s state champ in Class AA by set scores of 25-19, 25-17 and 25-22. The Trojanettes had not lost a set all season prior to their matchup with the Tigers.

In the opening set, the Trojanettes took an early 5-3 lead and hung tough with the Tigers throughout. Senior Ally Feczko, a Lafayette College commit, powered North Catholic with six kills in the first set on her way to a game-high 13 on the night. Senior Katie McNelly tallied three of her team-best five blocks in set one to spur on North Catholic. However, North Allegheny prevailed in set one, 25-19, behind the big swings of junior Jamie Frisco and senior Ella Deeter. Frisco totaled four kills in the set and Deeter finished with eight kills and 11 digs on the night.

In similar fashion to game one, North Catholic took a 7-5 lead in the early going but couldn’t build a sizable advantage. Senior Carissa Treser helped NA regain command with five kills and a block as the Tigers pulled out a 25-17 victory. Treser posted a team-best 11 kills by evening’s end.

The third set was a back-and-forth thriller as North Catholic seemed destined to force a fourth set. With the Trojanettes leading 22-19, senior middle blocker Ella Zimmer took over the match. Zimmer started the rally with a kill and followed with an incredible diving play that resulted in a point to cut the deficit to 22-21. An ace from senior Mia Tuman tied the score at 22-22 and a kill by Treser gave NA a 23-22 lead. Zimmer rose to the occasion again with a big block in the middle for a 24-22 advantage. Tuman put the match on ice with another ace and the Tigers won 25-22, ending the set on a 6-0 run. Zimmer finished with seven kills and a team-best three blocks, earning Wright Automotive Player of the Match honors.

Other stat leaders for NA included Tuman with a team-best 38 assists and two aces. She also added 10 digs on defense. Senior libero Caroline Curran paced the defense with 19 digs.

With the non-section win, North Allegheny improves to 6-0 on the season, while North Catholic falls to 4-1. The Tigers return to section play on Wednesday night with a visit to Butler.