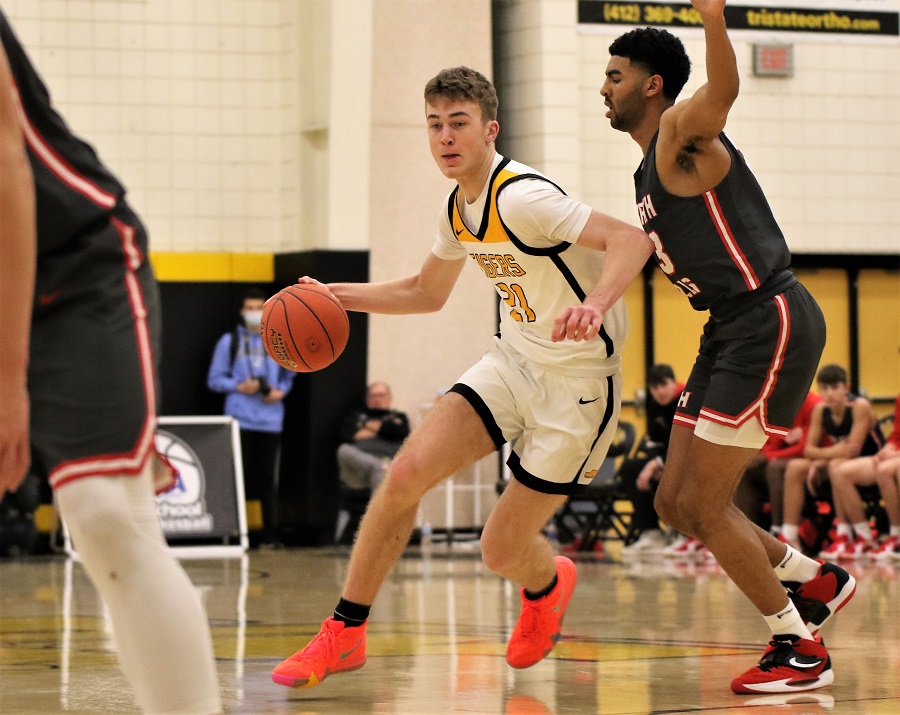 The North Allegheny boys’ basketball team dropped an 83-55 decision to North Hills on Friday in a non-section game at UPMC Court. These familiar foes renewed their rivalry despite playing in different classifications this season and the visiting Indians won their fifth in a row in the head-to-head series with the Tigers.

In a fast and furious first period, the lead changed hands five times as both teams traded opening jabs. Junior Anthony Sciote and senior Jack MacMurdo each poured in a pair of 3-pointers in the opening stanza as NA trailed by only one point, 19-18, with 1:20 on the clock. While the Tigers shot well early, the Indians continued to surge and put together a 19-2 run for a 38-20 lead with five minutes left in the second quarter.

Off the bench, freshman Eric James provided a spark with 11 points in the first half to help North Hills stretch the lead to 46-26 late in the second quarter. The Tigers ended the half on a 7-2 run thanks to a 3-pointer and a free throw by McMurdo, and a halftime buzzer beater from beyond the arc by junior Ben Lukitsch to trim the deficit to 48-33.

Led by junior forward and Division I prospect Royce Parham, the Indians pulled away in the second half and cruised to an 83-55 win. Parham finished with a game-high 29 points and was 12-for-13 at the free-throw line. Along with 11 points from James, Zach and Jake Pollaro netted 13 and 10 points, respectively.

For North Allegheny, McMurdo netted 13 points, including four 3-pointers and was named the Wright Automotive Player of the Game. Sciote totaled a team-high 14 points with four treys of his own. Junior forwards Joey Dopirak and Ty Iwanonkiw both fouled out in second half and scored eight and seven points, respectively.

With the loss, North Allegheny drops to 0-3 on the season following the non-section loss. North Hills improves to 2-1 overall. The Tigers look to get back on track with a visit to Moon on Tuesday night.