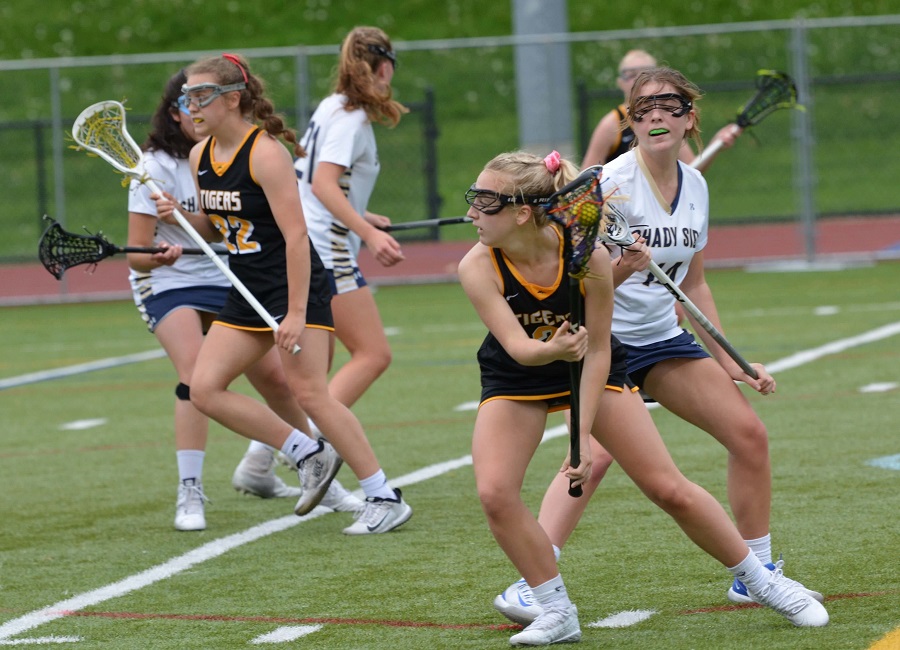 Tigers Tripped Up By Shady Side Academy

Entering the night just a half-game back of first-place Shady Side Academy in Section 2-AAA, the North Allegheny girls’ lacrosse team went toe-to-toe with SSA but dropped an 18-12 decision on Tuesday night. The playoff bound Tigers held a 10-7 lead in the early stages of the second half but Shady Side Academy used four-goal performances from both Jenny Woodings and Molly Walsh to remain undefeated in section play. The win locks up at least a share of the section crown for SSA.

In the first half, North Allegheny got off to a fast start offensively and was powered by senior Skye DePrado, who scored four of NA’s nine goals in the first 25 minutes. The Central Michigan commit finished with five goals on the night.

Contributing to the big first half for the Tigers were seniors Lola Wilhite and Alyssa Redshaw with two goals each and Bella Falo tallied a marker as well. Wilhite and fellow senior Katie Oates played an important role in time of possession with eight and six ground balls, respectively.

It appeared there might be a carryover of offense for North Allegheny in the second half when Wilhite scored her third of the game at the 1:38 mark. Wilhite ended the night with four goals and two assists.

Unfortunately for North Allegheny, the remaining minutes belonged to SSA, outscoring the Tigers 11-2 the rest of the way. The Tigers stayed close with Shady Side in the second half and trailed 14-12 with 10:18 to play. SSA pulled away with four goals in the last 5:50 of regulation.

Despite the loss there were other fine performances by the Tigers. On defense, senior Marissa Hess posted a team-best three caused turnovers. DePrado, Wilhite, Oates and Allison Lyon had two caused turnovers each. Freshman goalie Izzy Trunzo was once again impressive in net with 12 saves.

North Allegheny dips to 9-3 overall and 7-2 in Section 2-AAA. Shady Side Academy remains in first place with an 8-0 mark in section play. The Tigers will host Pine-Richland for another important section game on Thursday night. The contest will be broadcast by the North Allegheny Sports Network.