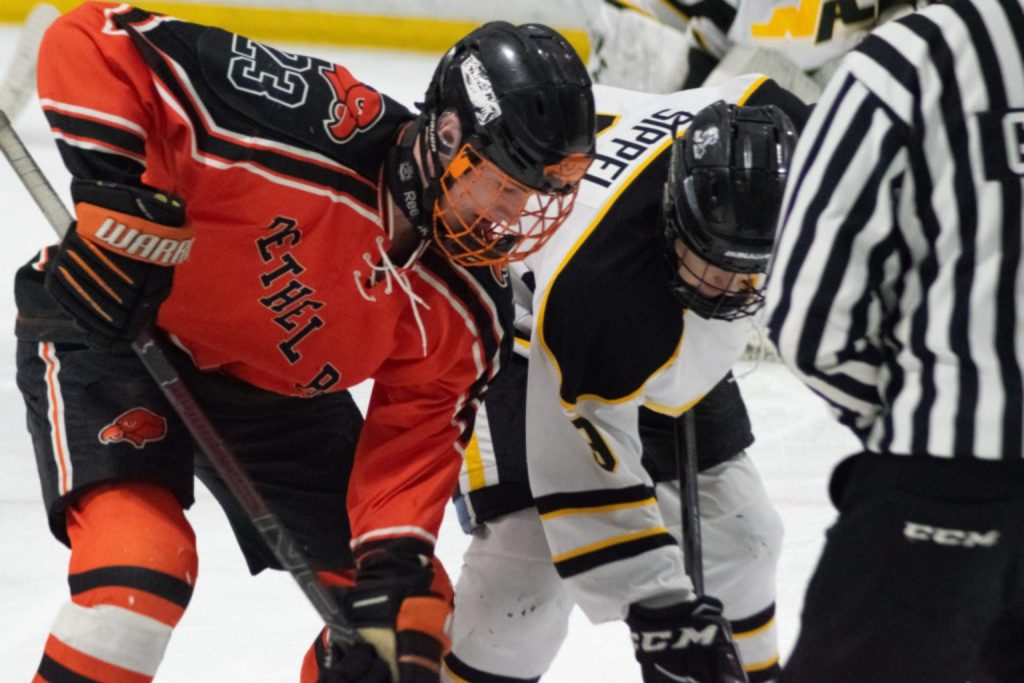 Top-seeded North Allegheny advanced the PIHL Class AAA semifinals for the sixth consecutive season with a 4-3 win in the quarterfinal round over eighth-seeded Bethel Park at the Baierl Ice Complex. The game was a rematch of last year’s semifinal classic that saw the Tigers prevail on a goal by Will Parreaguirre in double overtime. On Tuesday night, overtime was not necessary as NA was powered by the offensive tandem of Connor Chi and Tyler Putnam.

The first period was scoreless as Bethel Park’s defensive-minded play and goalie Zachary Ott held North Allegheny at bay. However, the Tigers wasted little time in the second period as Chi scored just seven seconds into the stanza for a 1-0 lead. At the 9:19 mark of the period, Chi won a draw in the Bethel Park zone and Putnam snuck a shot past Ott for a 2-0 North Allegheny lead.

While it appeared NA might pull away, a too many men on the ice penalty slowed the momentum at the 11:02 mark of the second period. Bethel Park didn’t score on the man advantage but did cash in with just 44 seconds to play in the period on a Luke McLinden marker, trimming the NA advantage to 2-1.

With a Bethel Park power play to open the third period, North Allegheny goalie Tyler Boyles denied a flurry of shots from the Black Hawks to keep the Tigers’ one-goal lead intact. After thwarting the BP power play to start the period, the duo of Chi and Putnam struck again for the Tigers. Chi tallied a goal at the 3:44 mark of the third and Putnam scored on a power play at the 7:20 mark for a 4-1 North Allegheny lead.

A power play goal by Bethel Park’s leading scorer, Joey Wandrisco, trimmed the deficit to 4-2 with 5:09 remaining in the game. The Black Hawks tallied one last goal from Ryan McLinden as time expired to bring the final score to 4-3, North Allegheny.

Boyles earned the win in net for the Tigers with 28 saves. Ott played admirably but took the loss, making 18 saves on the night.

Finishing with two goals, one assist and several timely defensive plays, Chi was named the Wright Automotive Player of the Game.

Also contributing offensively was Tyler Lamark with two assists, while Parreaguirre and Hayden Watson each chipped in with an assist. Putnam had a four-point night with two assists to go along with his two goals.

With the win, North Allegheny advances to the PIHL Class AAA semifinals to face the Pine-Richland Rams. The game will be held on Thursday, March 12 at the RMU Island Sports Center. As always, you can listen to all the action right here on the North Allegheny Sports Network.