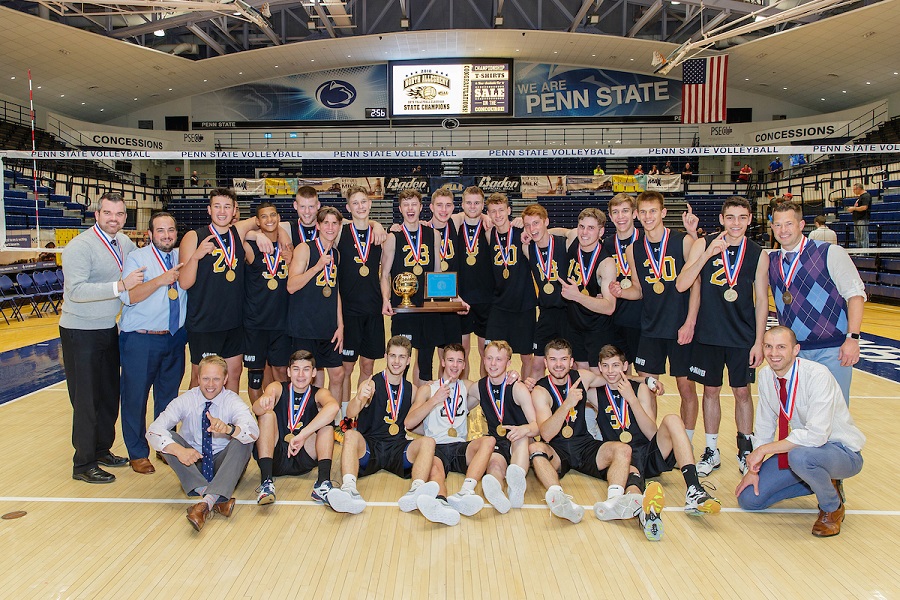 Appearing in the PIAA championship game for a record 16th time, the North Allegheny boys’ volleyball team won its sixth state title with a 3-0 sweep over Landisville Hempfield at Penn State University on Saturday. North Allegheny becomes the first WPIAL school, and third overall, to win the state title in both girls and boys volleyball in the same school year. Only District 3 Landisville Hempfield (2006-2007) and District 11 Parkland (2014-15) accomplished the feat prior.

Similar to when the Lady Tigers defeated Bishop Shanahan for the state crown in the fall, it was clear that the North Allegheny boys’ volleyball team was on fire from the very start. The Tigers defeated the Black Knights by set scores of 25-20, 25-17 and 25-21 to win the Class AAA crown.

In set one, the two teams kept things close with back-and-forth point scoring. Down 6-5, Jake Barber and Canyon Tuman led a charge of four straight points giving the Tigers a 9-6 advantage. NA did not give up the lead in the first frame and won the first set 25-20 on a Jason Stiefvater kill.

In the second set, Hempfield jumped out to an early 2-0 lead, but Barber and Jeremiah Zemet recorded a kill and a block to tie things at 2-2. A few plays later, a Barber block and a Tuman kill gave the Tigers a 5-3 advantage, and from that point in the set, NA would stay in the lead. An Alex Zubrow kill made it 23-15 and Stiefvater would tip and kill the final two points of the set to win the second frame 25-17.

North Allegheny only trailed twice in the third set. Following a point scored by Hempfield senior Zach Wilson, NA was down 9-8. Then a few plays later, two straight points from the Black Knights had the Tigers down 11-9. North Allegheny scored five straight points to regain the lead 14-11 and did not look back from there. Kills from Zemet, Tuman and Zubrow extended the lead to 17-14. Back-and-forth scoring ensued until Zemet tipped an easy point over the net to make the score 24-21. Barber finished the championship run with a kill and the Tigers swept the match with a 25-21 third-set victory.

Many Tigers stood out in the contest, including Stiefvater, who ended the day with nine kills. Barber had seven kills as well. Stiefvater and A.J. Schmidt led in digs with nine apiece. Schmidt had two aces to go along with 36 assists.

North Allegheny senior, and Penn State commit, Canyon Tuman led the Tigers with 16 kills, including six kills in the final set. For his efforts, Tuman was named the Wright Automotive Player of the Game.

North Allegheny caps the year with an undefeated record of 23-0. The NA girls’ and boys’ volleyball teams posted a combined 47-0 record in 2017-2018. For Hempfield, the state title match loss was its first and only loss of the season, ending the year with a 20-1 record.