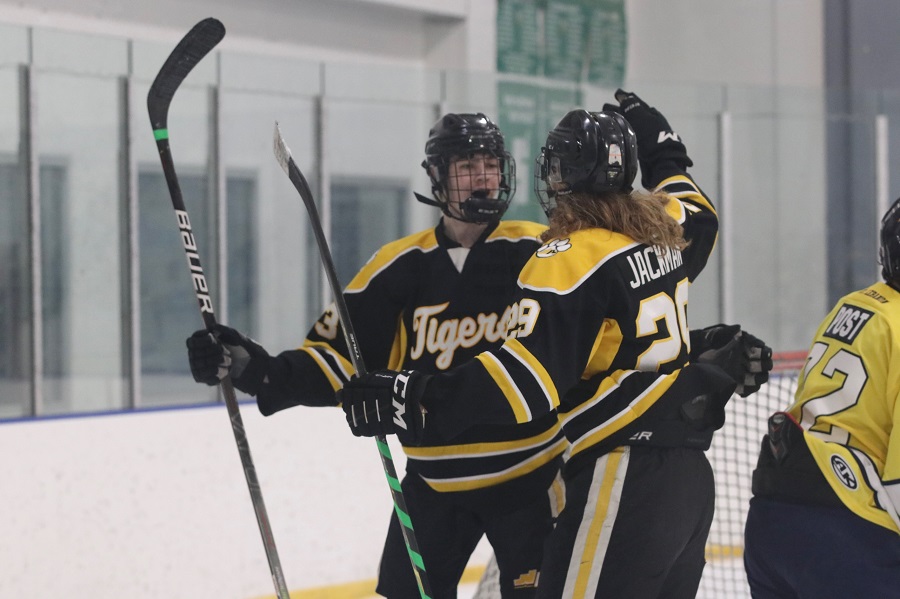 The North Allegheny ice hockey team won its fifth consecutive game on Thursday night with a 7-2 triumph over Mt. Lebanon. The victory also secured a season sweep over the Blue Devils, a team the Tigers beat last season for the Class AAA Penguins Cup championship.

Mt. Lebanon penalties in the first period opened the door for a quick start for North Allegheny. Junior Matt Irvin scored his third power play goal of the season, and eight overall for a 1-0 lead 3:23 into the game. Gifted another man-advantage less than three minutes later, it was Mt. Lebanon who temporarily stunned NA with a short-handed goal by Jackson Klasnick to tie the game at 1-1 at the 5:55 mark of the period. Still on the power play, the Tigers regained the lead on a goal by junior Nate Spak for a 2-1 lead. At the 14:16 mark of the first, senior Patrick Buttignol increased the NA lead to 3-1 with his fourth goal of the season.

In the second period, North Allegheny poured it on with goals by Evan Kaminksi, Luke Washabaugh and Nolan Collinear for a 6-1 lead. Keeping with the trend of the night, Washabaugh’s goal was a power play marker as the Tigers finished 3-for-4 on the man advantage.

Mt. Lebanon’s Ryan Patrick scored with 55 seconds left in the second period to trim the score to 6-2, Tigers. Spak netted his second of the night, and third of the season, just 1:46 into the third period to bring the final score to 7-2, North Allegheny.

In net, Andrew Long got the start and victory for NA with 21 saves. Mt. Lebanon’s Austin Martin made 22 saves in a losing effort.

First-place North Allegheny improves to 10-1-0 on the season, while Mt. Lebanon falls to 5-6-1 on the year and sits in fifth place in the Class AAA standings. The Tigers will take on Seneca Valley at North Park in the PIHL version of the Winter Classic on Jan. 3 at 7:30 p.m.