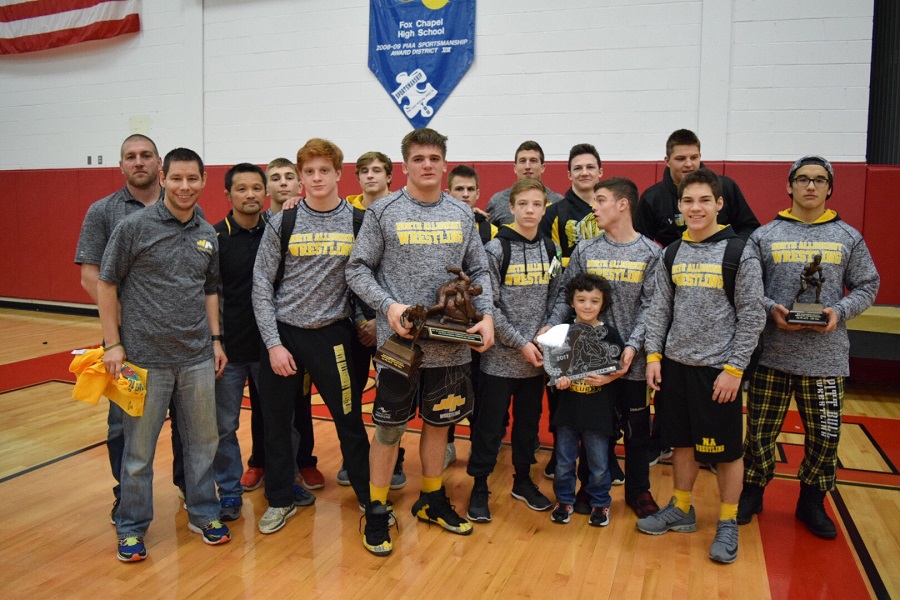 With two champions and seven medalists, the North Allegheny wrestling team won the Allegheny County Wrestling Tournament on Saturday. The Tigers posted a team score of 179.5 to take first place in the 34-team tournament, two points ahead of section rival Shaler who finished in second place.

It was a dramatic finish for the tournament crown as the Tigers trailed the Titans by eight team points going into the finals. The Tigers needed wins by both NA wrestlers competing in the finals, plus one of them registering a major decision or better to vault the black and gold to the team title. Both North Allegheny wrestlers delivered.

Senior Eric Hong won gold at 160 pounds with an 11-3 major decision over Bethel Park’s Jason Montgomery who was ranked No. 13 in the state. In the championship bout at 195, top-seed Jake Woodley beat returning tournament champion, Eli Grape of Upper St. Clair, by a 14-4 major decision to give NA the team tournament title. 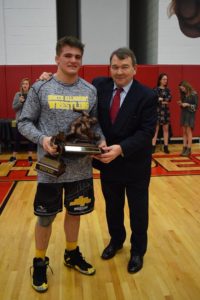 Jake Woodley was given the Brotherhood of Wrestling Award.

Junior Jacob Downing had a fine run at 113 pounds and took second place before falling in the title bout to Amir Muhammad of Baldwin. Junior Derek Devine medaled at 285 pounds with a fourth-place finish. Sophomore Jon Hoover and senior Jacob Fritsch each earned fifth place medals at 152 pounds and 182 pounds, respectively. Junior Gabe Falo rounded out the medal winners for the Tigers with a sixth place showing at 120 pounds.

Assisting in the two-point team title win were Will Baierl with two pins, Jake Hinkson with one pin, Freddy Junko with one pin and one major decision, and Nick Marcenelle with one decision. For a look at the entire bracket from the Allegheny County Tournament, click here.

North Allegheny looks to ride the momentum of the Allegheny County Tournament title into the Section 3-AAA Team Tournament on Wednesday night at Butler.