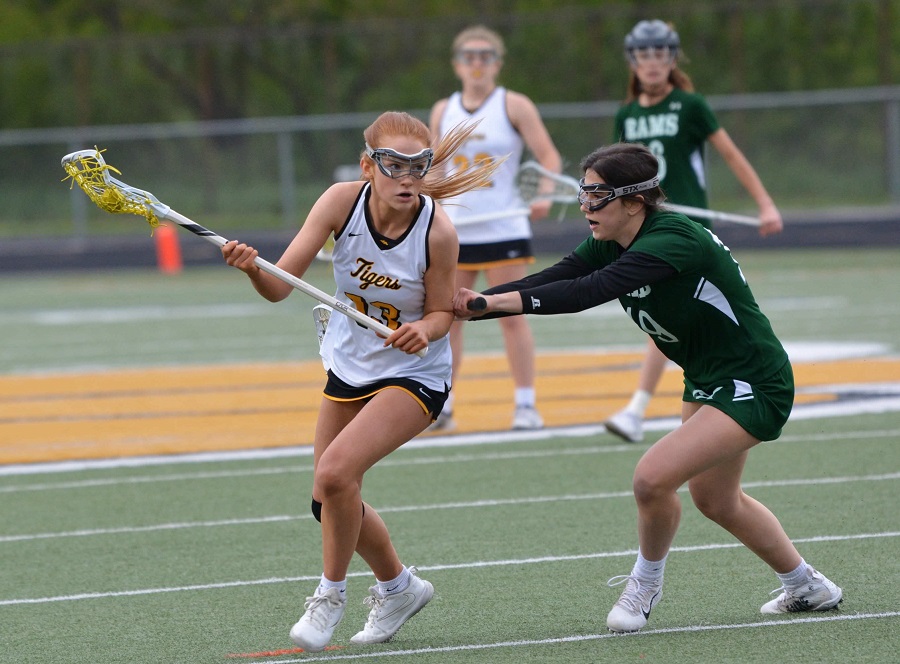 After falling 18-12 to Section Champion Shady Side Academy on Tuesday, North Allegheny knew its hopes for one of the top two spots in Section 3A (2) were dashed. The Tigers and Pine-Richland came into tonight’s match with identical (7-2) section records with third place on the line. The Tigers responded well from the loss and an early 2-0 deficit to defeat the Rams 15-9, clinching the #3 spot in their last section match.

Lafayette recruit Haley Albrecht and Mia Petzuk scored in the first 90 seconds of the game to give the Rams a two-goal lead. But Katie Oates scored her 20th goal of the season after a turnover, and Alyssa Redshaw converted a Skye DePrado assist and then fed Bella Falo and the Tigers had three goals in 1:18 and a 3-2 lead. After Albrecht tied the game, Lola Wilhite netted two straight goals and Falo added her second to make the score 6-3. Ut Katelyn Terchick and then Albrecht with the hat trick tally brought Pine-Richland within one.

Falo then completed her sixth hat trick of the season and DePrado added her first of the night before Wilhite beat the clock, scoring her second with no time remaining on the first half clock. Originally ruled no goal, the referees reversed the call after a long discussion and NA had a 9-6 halftime lead.

Oates added her second sandwiched in between two Rams goals, and DePrado scored to make it an 11-8 score. The Rams crept within two, before Deprado (2), Redshaw and Wilhite tallied to put the match away for the Tigers, who improved to (10-3/8-2) with the win.

Deprado, who finished with 5 points (4G, A), now has 72 goals on the season. Falo notched the hat trick, while Oates (one assist) and Redshaw (two assist) scored twice. Mila Prusak added and assist while Izzy Trunzo picked up the win in net for the Tigers.

The Wright Automotive Player of the Match honors went to midfielder Lola Wilhite. The senior scored four times and now has 50 goals on the season. She also added two assists, was key in the circle picking up draw controls on ground balls and played great on the defensive side of the ball, causing two key second half turnovers which help North Allegheny put the match away.

The Tigers finish the season with four straight non-section home matches starting tomorrow night against Franklin Regional. All those contests through next Thursday can be heard on the North Allegheny Sports Network.