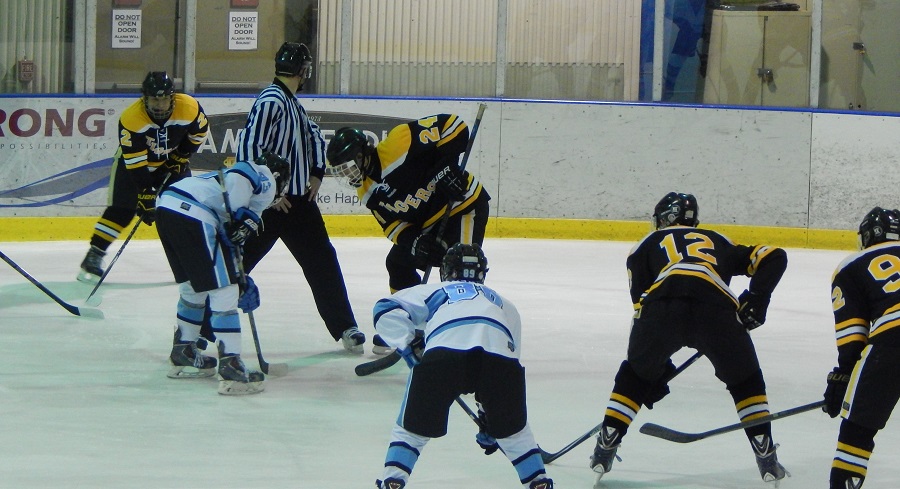 North Allegheny broke a 2-2 tie in the third period with two unanswered goals to claim a 4-2 victory over the Seneca Valley Raiders on Monday night.  Dawson Richard scored the game winner midway through the third period and Nathan Taylor put the game away with an empty netter with 10 seconds to play.

Both teams call BladeRunners in Warrendale home, but this was technically a road game for the Tigers as NA donned the road black jerseys for the contest. On the familiar surface, the Tigers grabbed the lead on a first period goal by Taylor, assisted by Richard and William Rahenkamp.

The Raiders evened the score at 1-1 at the 4:30 mark of the second period on a tally by Louis Martin, but North Allegheny regained the advantage on a power play goal by Dominick Zangaro at 8:30 of the period for a 2-1 lead.

At the 6:34 mark of the third, the Raiders knotted things up again at 2-2 when Alexander Crilley scored on a feed by Connor Williams and Samuel Johnson.  The tie didn’t last long, however, as Richard scored just 31 seconds later to put NA on top for good.

Goalie Douglas Wild picked up the win for the Tigers by making 14 saves on 16 shots.  Seneca’s Alyssa Peterson stopped 21 shots.

With the win, the Tigers stretch their unbeaten streak to eight in a row and remain in first place atop the Class AAA standings with an 8-1-2 record and 18 points. Seneca Valley falls to 6-5-0 on the season and sits in the middle of the pack with 12 points.