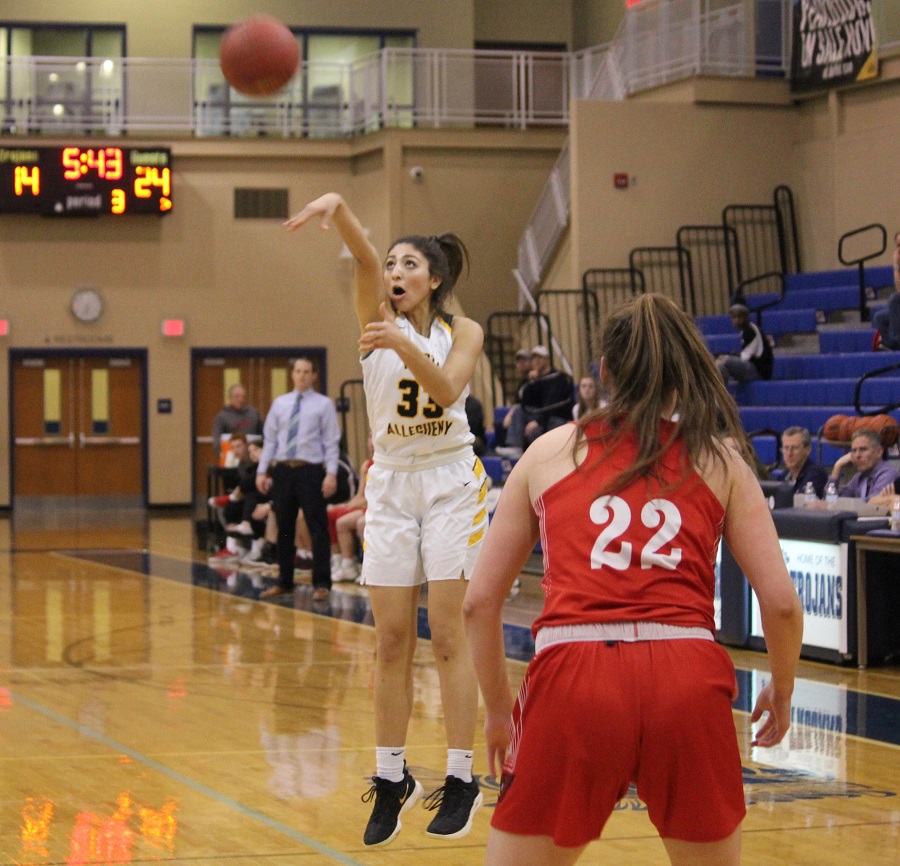 In a showdown between two of the top teams in Class 6A, the reigning state champion Upper Dublin Cardinals upended the North Allegheny Tigers, 41-32, in the second round of the PIAA tournament on Tuesday night at Chambersburg High School. Upper Dublin advances to the state quarterfinals to face District 1 rival Abington on Friday night.

North Allegheny opened the first quarter with a 5-1 lead courtesy of a layup by junior Katerina Balouris and a 3-pointer by senior Rachel Martindale. Upper Dublin was slow to find its rhythm in the early going and didn’t score from the field until a Jackie Vargas layup with 2:22 remaining in the opening stanza cut the NA lead to 5-3. The Vargas layup sparked an 8-0 run for the Cardinals, who held a 9-5 lead after one quarter of play.

After a pair of Martindale free-throws trimmed the Upper Dublin lead to 16-11, the Cardinals used another 8-0 run to end the second quarter for a 24-11 advantage at intermission. Vargas, a first-team all-state selection last season, scored 10 of her game-high 17 points in the first half.

The third quarter was a defensive struggle that saw NA cut the deficit to single digits at 27-19 before freshman Bliss Brenner threw up a desperation 3-pointer to successfully beat the third-quarter buzzer to give the Cardinals a 30-19 lead going into the fourth period.

North Allegheny began the first of two fourth-quarter rallies with a 7-0 run that trimmed the Upper Dublin lead to 30-26 with 5:14 remaining in the game. The NA run consisted of a Martindale pull-up jumper, a Brynn Serbin 3-pointer and two free-throws from sophomore Lizzy Groetsch.

The defending state champs responded with a 7-0 run of their own that was sparked by a 3-pointer courtesy of sophomore Dayna Balasa. The Upper Dublin sharpshooter finished the night with 11 points and three treys.

With Upper Dublin leading 37-26 with two minutes to play, North Allegheny mounted another late charge that was spearheaded by Martindale. The Akron University commit drained a pair of 3-pointers during a 6-1 run to trim the Upper Dublin lead to 38-32 with 1:09 remaining. Martindale scored a team-high 13 points and was named the Wright Automotive Player of the Game by the North Allegheny Sports Network.

Despite NA’s comeback bid, the Cardinals were able to fend off the Tigers at the free-throw line and with their feisty defense for a 41-32 victory.

North Allegheny’s season comes to a conclusion with a record of 24-3, marking the sixth consecutive season the Tigers reached the 24-win plateau.

For the senior class, Tuesday’s outcome caps a remarkable four-year run of success. Over the last four years, the Lady Tigers compiled a record of 105-11, which includes two WPIAL titles and one PIAA championship game appearance. Congratulations to head coach Spencer Stefko and the entire North Allegheny girls’ basketball team for another memorable season.