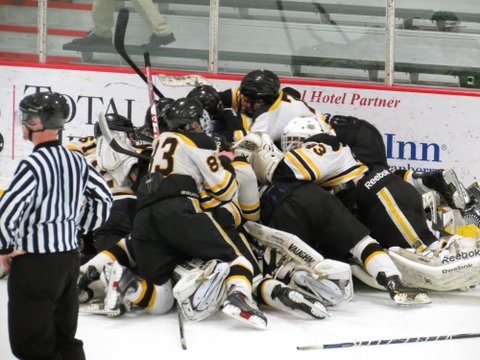 Another OT Thriller, NA Moves On To PIHL Championship

The top-seeded North Allegheny Tigers won their second straight overtime thriller in the postseason and beat the Peters Township Indians, 4-3, in the PIHL semifinals on Wednesday night at the RMU Sports Center. Junior defenseman Cameron Zahn scored the game winner at the 5:03 mark of overtime to send the Tigers to the PIHL championship game for the second time in the last four years. (Click here to watch Zahn’s game-winning goal in overtime)

While the Tigers won the game, it was Peters Township who dominated the action in the first period. The Indians netted the first goal of the game on a two-on-none breakaway as Matt Amelio beat NA goalie Joe Hubert for a 1-0 lead with 8:36 remaining in the period. Even though the Indians controlled the pace in the opening stanza, the Tigers stole away any momentum gained by PT with a late goal and tied the game at 1-1 on a marker by Joe Zappia with just one second left in the period.

North Allegheny cashed in on a power play in the second period and grabbed a 2-1 lead when John Parks squeezed a shot past Peters Township goalie Caden Shell with 11:07 on the clock. The seesaw nature of the game continued in the third period as Peters Township tied the game on a Will Barnes goal, and the Indians took a 3-2 lead on a Ross Opeka marker with 8:42 remaining in regulation.

Trailing by a goal with 6:31 to play, NA’s Matthew Heil was called for a roughing penalty and Peters Township was on the power play with a chance to put the game away. The Tigers killed that penalty and scored the equalizer shortly after. NA junior Erik Chidester dug the puck out of the left corner and passed to an open Dawson Richard in front who tied the game at 3-3 with 4:11 remaining.

The game stayed deadlocked until Zahn’s slap shot won it for the Tigers in overtime, 4-3. For scoring the game winner, Zahn was named the Wright Automotive Player of the Game by the North Allegheny Sports Network.

The Zahn slapper trickled through goalie Caden Shell and teetered on the goal line. Sprawling in an attempt to make the save, Shell incidentally pushed the puck into the net and North Allegheny claimed the OT win. Both goalies played well and faced a bevy of shots. Shell stopped 32 shots and NA’s Joe Hubert made 42 saves in a tremendous effort.