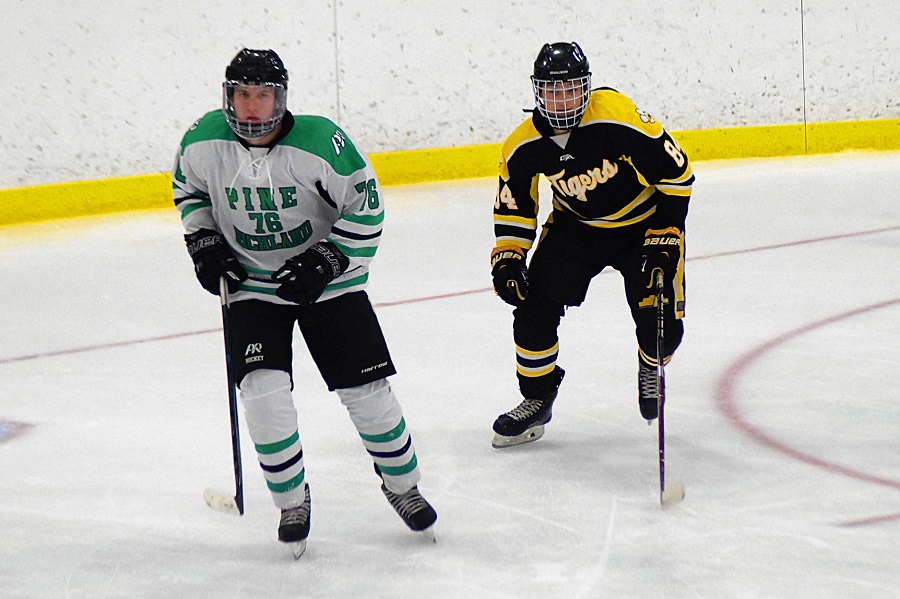 North Allegheny scored two goals late in the third period to pull out a 5-4 win over Upper St. Clair at the Ice Castle in the South Hills on Monday night. Tyler Putnam scored two goals and Vince Abel netted the game-winner with 3:46 remaining to propel the Tigers to victory. With the win, the Tigers remain in first place in the Class AAA standings with a 7-0-1 record.

It was Putnam who struck first with a goal at the 8:43 mark of the first period to give NA a 1-0 lead. Upper St. Clair evened the score at 1-1 less than two minutes later on a marker by Chase Wucher.

NA and USC continued to trade goals in the second period as Luke Washabaugh put the Tigers back in front, 2-1, at the 4:32 mark. Once again, Upper St. Clair tied the score with a goal by Jacob Ball at the 6:05 mark of the second. On the strength of a power play, North Allegheny regained the lead just 48 seconds later when Trey Gallo scored to put the Tigers ahead, 3-2.

After intermission, Upper St. Clair came out strong and tallied two straight goals, including a power play goal by Mitchell Geinzer at the 8:56 mark, to give the Panthers the lead, 4-3. That set the stage for NA’s late game heroics as Putnam netted his second of the night at the 9:33 mark of the third, tying the contest at 4-4. Abel finished off the NA rally with the go-ahead goal with 3:46 to play and the Tigers prevailed, 5-4.

Josh Bailey was the winning goalie for North Allegheny with 16 saves. USC’s Kyle Rohrich made 25 saves in the loss.

The first-place Tigers will skate against Peters Township on Thursday night at home at 9:10 p.m. The game will be broadcast live via the internet by the North Allegheny Sports Network.