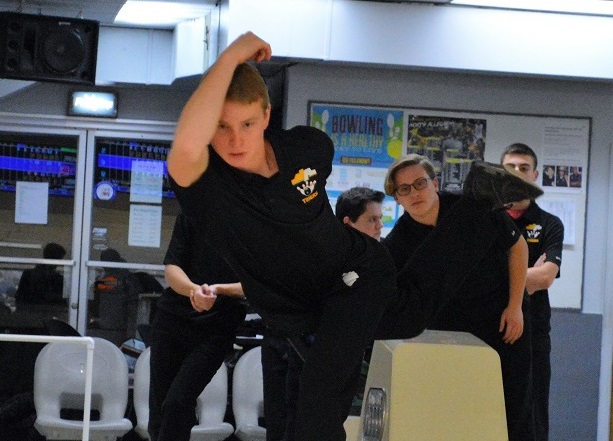 Match 5 vs. Butler
The Tigers were in action Tuesday for the first match of the New Year. Originally scheduled for Monday, the match was postponed due to poor weather conditions. With a smaller squad on hand, the Tigers travelled to Butler, but the Perennial Powerhouse proved too strong on this day for the Tigers.

With only four bowlers, the Lady Tigers were guaranteed a team loss, 0-7, but the girls’ team persevered with sophomore Julia Jorden leading all bowlers after the first game with a personal best of 200 pins. Along with Jorden, sophomore Caroline Radocaj had a personal best three games series of 376. The Lady Tigers fall to a record of 3-2 for the season, but remain near the top of the WPIBL North.

The Boys’ Team suffered their first match loss of the season losing 7-0 to Butler. Being on familiar lane conditions seemed to benefit the Golden Tornadoes as they bowled their season high team series, 2990, placing them 2nd out of 54 teams for week 5 matches in the entire WPIBL.

Leading the Tigers was senior T.J. Robinson who rolled his highest game of the year, 238, and finished with a 572 series. Sophomore Steven Reybein contributed two spectacular games of 200 and 202. Not to be outdone, seniors Joe Fritsch, Max Micucci, and Matt Secen joined the leaderboard with a 211, 202, 201, respectively. These three gentlemen also rolled their highest three game series this week.

After week five, the varsity team is solidly in second place behind Butler, with six bowlers holding strong for contention in the WPIBL Singles Championships.

Match 6 vs. Freeport
The Tigers quickly rebounded from Tuesday’s loss to Butler by soundly defeating the Freeport Yellow Jackets for the second time this year. This was the first time the Tigers travelled to Wildlife Lanes in Lower Burrell, and adapted well to the unfamiliar conditions.

With a full team, the Lady Tigers were on the prowl promptly putting an end to any of Freeport’s aspirations. The Tigers won the first game by 172 pins and finished the day with a 309 pin advantage, soundly winning all 7 match points. Sophomore Julia Jorden led all bowlers each game knocking over 182, 187, and 162 for the match. This 531 series is a personal best. Through six weeks of competition, Jorden has placed herself in contention for moving on to the WPIBL Singles Competition in February. The Lady Tigers currently are 4-2 in the section and face rival Shaler next week.

The Boys’ Team also “righted the ship” by returning to their winning ways, beating Freeport 5-2. Junior Alex Cook rolled his best game of the year 235, and finished with his highest, 595. Rookie Dylan Scheidler was an integral part of the Tigers victory posting a personal best-232 as well as a 206 game. Senior Griffin McVay added a 211 and 583 Series in the Tigers’ assault.