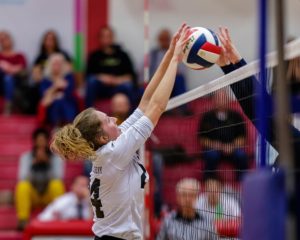 (Wexford, PA – Jan. 4, 2023) – A starter since her sophomore year, Abby Miller led the Tigers to a 23-1 record and a third straight PIAA championship during her senior year. She was also instrumental in winning two WPIAL titles and an eye-popping 65 matches in a row from 2017-2019. Individually, Miller was a three-time All-State, All-WPIAL and All-Section selection. In 2018, she was named the Pennsylvania Gatorade Girls Volleyball Player of the Year and the Pittsburgh Post-Gazette Player of the Year. With the help of Miller, the North Allegheny girls’ volleyball team has posted an overall record 86-3 over a four-year period.

As a member of the Cleveland State University Vikings, Abby has accumulated 147 kills, 378 digs and 43 service aces.