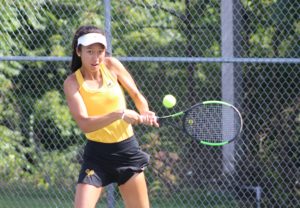 Ashley was ranked as four-star recruit by Tennis Recruiting Network, ranking first in Pennsylvania and as high as 81st nationally. She represented middle states at USTA Girls Nationals in both 2017 & 2018) and was the Middle States Sectional Championship winner in 2018.

Ashley has continued her tennis career in college as a member of the Cornell University Women’s team.