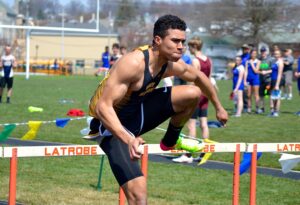 (Wexford – Jan. 1, 2023) – Owens will go down as having one of the most impressive track and field careers at North Allegheny. In his senior season, Owens led the Tigers to a gold medal in the WPIAL Championships and PIAA Championships. In March, Owens won a National Title and broke a state record in the 60-meter hurdles at the New Balance Indoor Track and Field Nationals. He set the record with a time of 7.59 seconds. Owens is also a two-time national champion in the decathlon.