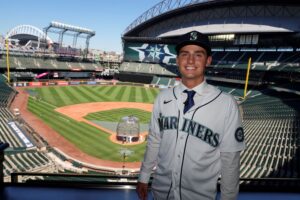 Young was the first freshman ever selected to the Post-Gazette’s All-Area team. He made the squad every season of his career, and he was the Player of the Year in his junior and senior years for both the Pittsburgh Post-Gazette and Trib Live High School Sports Network. In his senior year, Cole had a .433 average with 8 doubles, 4 triples, 2 home runs and a 1.364 OPS. He hit over .400 every year of his high school career.

In the field, Cole was also impressive. In his 73 games for NA, Cole finished with a .951 fielding percentage with only 12 errors in 105 chances

After being drafted Cole played on Seattle’s minor league Class A affiliate, the Modesto Nuts, batting .367, with a .423 OBP and hitting two home runs.