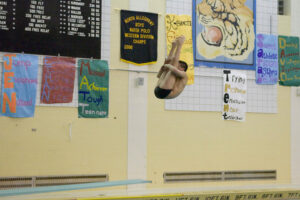 (Wexford, PA – Jan. 17, 2023) – Connor Kuremsky, a 2011 NA graduate accomplished the rare “four-peat” as the WPIAL 1-meter diving championship in 2011.  In addition to capturing his fourth WPIAL gold, he consecutively broke (in 2008) and then improved (his own) record performances for the event, eventually scoring 607.30 points in his final WPIAL competition.  He was also the PIAA champion in the event for the same four consecutive years and his 2011 score of 599.50 still stands as the state record as of this time.