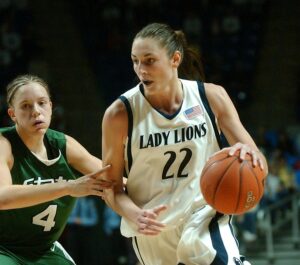 (Wexford, PA – Jan. 1, 2023) During her time at North Allegheny, Jessica led the Tigers to three consecutive WPIAL finals. She graduated as NA’s all-time leading scorer with 1,535 points and was named to the Post-Gazette Fabulous Five in 2000.

Jessica continued her college career at Penn State. During her four-year career as a Nittany Lion, she was a power forward who was known primarily as a rebounder. But she still managed to score 1,143 points and grab 649 rebounds. She was the 16th pick overall in the 2004 WNBA draft, selected by the Connecticut Sun where she played for two years.