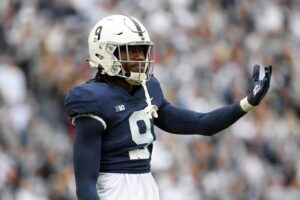 (Wexford, PA – Jan. 5, 2023) – North Allegheny alumnus defensive back Joey Porter Jr was one of the top corners in the WPIAL, selected to the Trib 25 All-Star Team, the Pittsburgh Post-Gazette’s Fabulous 22, and first-team all-conference by the Big 56 Conference. Providing blanket coverage in the secondary, Porter corralled three interceptions during the 2018 season after posting a seven-interception performance as a junior in 2017. A skilled kick returner and receiver, Porter was second on the team in receiving yards (186) and hauled in three touchdown passes his season.

As a Nittany Lion, Porter has played in 34 games, compiled 114 tackles, two tackles for loss, a sack, a forced fumble, a fumble recovery, an interception and defended 20 passes. He set a Penn State record and tied a Big Ten record for breaking up six passes in a single game in 2022 against Purdue. He was named first team All-Big Ten this past season. He recently declared this past November that he would enter the 2023 NFL draft and is currently projected as a first-round pick.