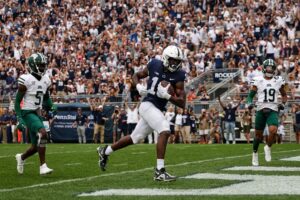 (Wexford, PA – Jan. 5, 2023) – A multi-sport athlete, Dinkins starred for North Allegheny on the gridiron and on the hardwood. Dinkins earned two all-state awards his senior year, was selected as a First-Team All-State linebacker by Max Preps and by the Pennsylvania Sports Writers Association. He was North Allegheny’s male athlete of the year in 2021.

On offense, Dinkins saw time at receiver, running back and quarterback. Dinkins rushed for 222 yards and four touchdowns on 34 carries. As a receiver, he hauled in 20 receptions for 284 yards and a team-leading four receiving touchdowns. Khalil delivered big plays for NA on defense, including a 40-yard interception return for a touchdown in a victory over Central Catholic.

Among his many football accolades received, Dinkins was named first-team all-conference by the Big 56, chosen for the Fabulous 22 Team by the Pittsburgh Post-Gazette and the Trib HSSN’s Terrific 25. For the Tigers basketball squad, Dinkins earned first-team all-section accolades from the Big 56 and played in the annual Roundball Classic at Geneva College.

As a Nittany Lion, Khalil plays tight end and scored his first touchdown and this past September in a 46-10 win against the Ohio Bobcats.