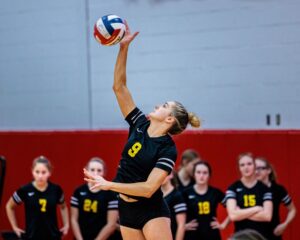 (Wexford, PA – Jan. 17, 2023) – Mia Tuman has been collecting gold medals since her freshman year. She received two that year, first as a member of the Tiger girl’s PIAA state champion volleyball team and then as a member of the 2020 girls WPIAL basketball team. She added two more gold medals in basketball the following year helping the Tigers to win another WPIAL championship as well as the program’s first PIAA basketball state title.  For an encore, Mia joined the Tiger’s track team for the 2022 track season helping the team to their first WPIAL team championship since 2005.

It is volleyball, however, that Tuman will long be remembered for, having collected three more PIAA and two more WPIAL golds for a combined total of nine between the two sports.  Mia was named the Gatorade 2022 and 2023 Pennsylvania Player of the Year. Other accolades include being named the Post-Gazette player of the year for the past two years, MaxPreps Player of the Year (for Pennsylvania) and a three year PVCA (Pennsylvania Volleyball Coaches Association) All-State honoree. Mia is graduating this month to attend Ohio State and prepare for the Buckeye’s next women’s volleyball team season.