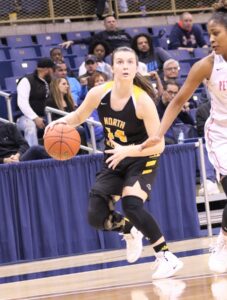 Martindale in the 2019 WPIAL Class 6A Championship Game.

On the hardwood, Martindale averaged 13.7 points and 5.2 rebounds per game in the 2018-19 season. She totaled 1,373 points, 267 3-pointers, 270 assists and 205 steals in her North Allegheny career. The Tigers amassed a record of 105-11 during her four year-tenure. Among a bevy of accolades, Martindale was named all-state three times by the Pennsylvania Sports Writers along with back-to-back laurels on the Trib 10 and Post-Gazette’s Fab Five lists. 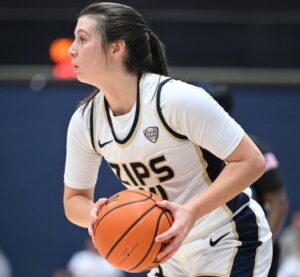 Due to a knee injury suffered in the 2018 WPIAL Class 6A girls’ basketball championship game, a contest the Tigers won, Martindale missed the rest of the state playoff run and the entire 2018 softball season. She showed no rust upon her return to the basketball court or the diamond. On the softball field, Martindale posted 101 career hits to go along with a career .470 batting average, 14 home runs, 70 RBI and 96 runs scored in just three seasons. She had received post-season recognition as the Trib Live HSSN’s Class 6A Player of the Year and the Pittsburgh Post-Gazette softball Player of the Year for the 2019 season. She was also North Allegheny’s and the Post Gazette’s female athlete of the year in 2019.

Currently, Rachel is continuing her basketball career with the Akron Zips where she is completing her senior season.