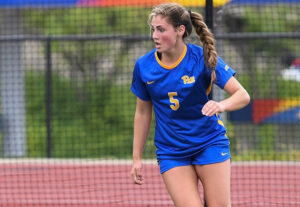 (Wexford, PA – Jan. 3, 2023) – With 60 career goals, Sarah led the Tigers to their two best seasons in program history. In 2019, Schupansky netted a team-best 23 goals and directed NA to its first WPIAL crown. As an encore, Schupansky scored 24 goals in just 16 games in 2020 and helped pave the way for a second straight WPIAL title and NA’s first ever appearance in the PIAA championship game in Hershey.

She was honored as the recipient of the 2020 Moe Rosensteel Player of the Year Award. The award is given to the top girls’ soccer player in Western Pennsylvania.

She was named all-state by the Pennsylvania Soccer Coaches Association for two consecutive years.

In her freshman year at the University of Pittsburgh,  she scored her first goal (a golden goal) sealing a 3-2 overtime win against # 18 Oklahoma. She was selected to Top Drawer Soccer’s National Team of the Week for NCAA Division 1 soccer in August 2021.  She was also named to All-ACC Academic Team. During her first two seasons at the University of Pittsburgh, Sarah has played in 40 matches, scored 14 goals and has 14 assists.