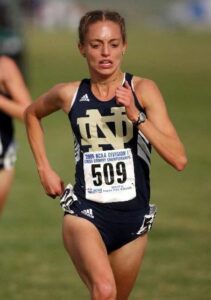 She was named in both 2001 and 2002 the Pittsburgh Tribune Review female athlete of the year as well as one of the top 50 high school girls distance runners nationally in 2001 by Harrier’s. She placed 23rd in the Footlocker Cross country national competition in 2001.

Stephanie continued her college career at Notre Dame University. As a member of the Fighting Irish, she was chosen as one of four finalists for the 2005-06 Honda Sports Award in cross country, an honor presented annually to the nation’s top women’s cross country runners. In 2006, Stephanie was named by ESPN The Magazine with her first Academic All-America plaque, earning second-team status.  She was inducted into the North Allegheny Hall of fame in 2010 and the WPIAL Hall of Fame in 2019.