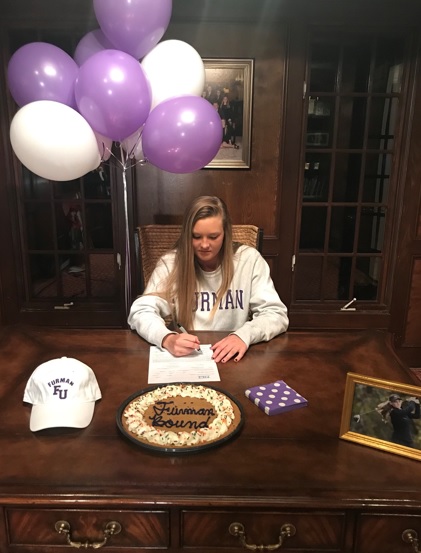 North Allegheny senior golfer Caroline Wrigley signed her letter of intent on Wednesday to continue her athletic and academic career at Furman University.

The top-ranked player in Pennsylvania, Wrigley, a native of Wexford, Pa., ranks 59th nationally among her recruiting class.  She won her third-straight individual district title last month and went on to claim individual medalist honors for the second-consecutive year at the state championships.  Wrigley, who helped her North Allegheny team to three team state titles, shot a career-low 65 in a high school tournament as a senior this fall.  She has six top-10 AJGA finishes, including a third-place finish at the Penn State AJGA, and tied for 25th at the Junior PGA Championship in 2016.

Wrigley is a member of the National English Honor Society.  Her uncle, Frank Fuhrer III, played collegiate golf at North Carolina and was a member of the U.S. Walker Cup team in 1981.  He played professionally for five years and competed in the Masters Tournament in 1982.