Former North Allegheny quarterback Adam Neugebauer has been named the wide receivers coach at Georgetown University. Neugebauer most recently spent the last six seasons on the coaching staff at Division II Tiffin University, including the past two as offensive coordinator. 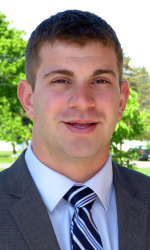 As a North Allegheny Tiger, Neugebauer helped transform the Tigers offensive from a run dominated scheme into a more balanced attack. In 2005, Art Walker’s first season as Tigers head coach, Neugebauer threw for more than 1,000 yards and 10 touchdowns during his junior season which was virtually unheard of at the time for a North Allegheny quarterback.

Injuries cut short his senior season at NA but Neugebauer went on to play quarterback at West Virginia Wesleyan where he broke 15 school records. He led Division II in five offensive categories as a senior in 2011, including passing yards (4,111) and touchdowns (42) on his way to All-American honors, among other accolades. Following his collegiate career, Neugebauer played Arena Football for the Green Bay Blizzard and Marion Blue Racers.

For more details on Neugebauer’s background and his hiring at Georgetown University, click here.