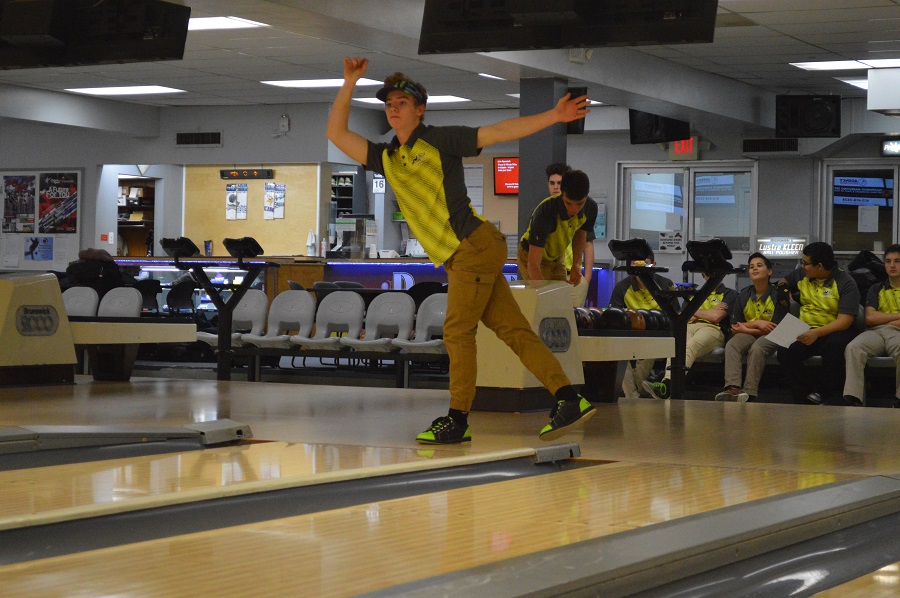 The North Allegheny Boys Varsity team ventured to Wildlife Lanes in Lower Burrell to take on the best teams in the WPIBL. The top 2 teams in each of the 9 sections of the WPIBL receive bids for this match; the first competition of the playoff season.

Since the best of the best attends this competition, the WPIBL ups the ante and throws down the gauntlet with a Sport oil pattern.

During the regular season, a bowler can miss their lane target and still possibly strike due to the fact that there is a lot of oil in the middle part of the lane and very little on the outside part. A right-handed bowler can miss his/her mark to the left, but the extra oil toward the middle of the lane helps the ball hold position and not hook too much. If they miss to the right, there is less oil and the ball hooks more, allowing it to get back to the pocket.

However, on a Sport pattern, the oil is distributed more evenly across the lane. If a right-hander misses to the left, the ball will hook just as much and cross over the headpin to the Brooklyn side. There is much more oil on the outside part of the lane, too, so an errant shot to the right might even slide into the gutter.

Bowling on a Sport shot puts a magnifying glass to anything the bowler does wrong: speed, hand position, rotation, arm swing, steps, timing – you name it, with only a small margin of error allowed.  Sport Bowling definitely makes the bowler think and concentrate a lot more.

The Tigers entered the competition as the 11th seed based upon their regular season record.  It took a couple of frames during the first game before the Tigers could find their rhythm on the Route 66 oil pattern. Senior T.J. Robinson led the Tigers with a 192 with freshman Dylan Scheidler and junior Alex Cook not far behind with 189 and 187, respectively.  After game 1, NA was in 5th place (882 pins).  With 90 bowlers starting in the competition, Robinson was ranked 14th, Scheidler 17th, and Cook 18th.

The Tigers changed lanes for the second game. NA threw a few splits to begin the game, but quickly adjusted to the breakdown of the oil pattern, and were able to convert.   As the game continued, the lane conditions began to play similarly to what the Tigers are accustomed to at Perry Park Lanes, in McCandless.  During this transition, the Tigers ran up the score against the other teams, knocking over 983 pins.  Robinson led the team for the second game in a row with a masterful 221.  Senior Griffin McVay joined the ranks as he threw a 215.  All five bowlers from NA placed in the top 37 bowlers for game 2 with Robinson and McVay coming in at 3rd and 4th place.  At the conclusion of the second game, Robinson had knocked over a cumulative total of 413 pins earning him 3rd place among the 109 bowlers.  Scheidler was holding strong at #13.   Two games into the match and the Tigers jumped into 2nd place.

If a Sport pattern isn’t challenging enough at the beginning of the match, to further complicate things, it will either break down exactly as expected, or it will break down across the lane in so many different spots the bowlers aren’t sure what the breakpoint is anymore.

With that being said, missing two or three spares, along with your strike percentage not being as high as it usually is, it is very easy to shoot under average on a Sport shot. Throw a split or two in there, and you can consider it a very rough day at the lanes.

It was a rough third game for NA. Spares are the name of the game. Period. With only a few boards to hit, spare shots are a must, but the Tigers faltered as the day continued, mustering only 721 pins for the last game of the competition.

On a positive note, the Tigers finished the day tied for 4th place; finishing better than they have for the past two years.  Robinson ended the day in 14th place, McVay 16th, Scheidler 28th, Andrew Cook 40th, Alex Cook 46th.

Furthermore, the NA Tigers have extended their playoff season by qualifying for the Pennsylvania State Western Regional Team Competition on Saturday, March 10th.   Based upon their stellar performance this past week, the Tigers look to make a run at the Regional and State Championships.

This Wednesday, all five of the NA Boys Varsity bowlers will join 111 other bowlers to compete as individuals at the WPIBL Boys Singles Championships in North Versailles. The top 40 bowlers will move on to the Pennsylvania State Western Regional Singles Competition on Friday, March 9th.

This Thursday, sophomore Julia Jorden will compete at the WPIBL Girls Singles Championships in Beaver Falls, PA.  She will be competing against 81 other bowlers for the 40 coveted spots to Regionals.