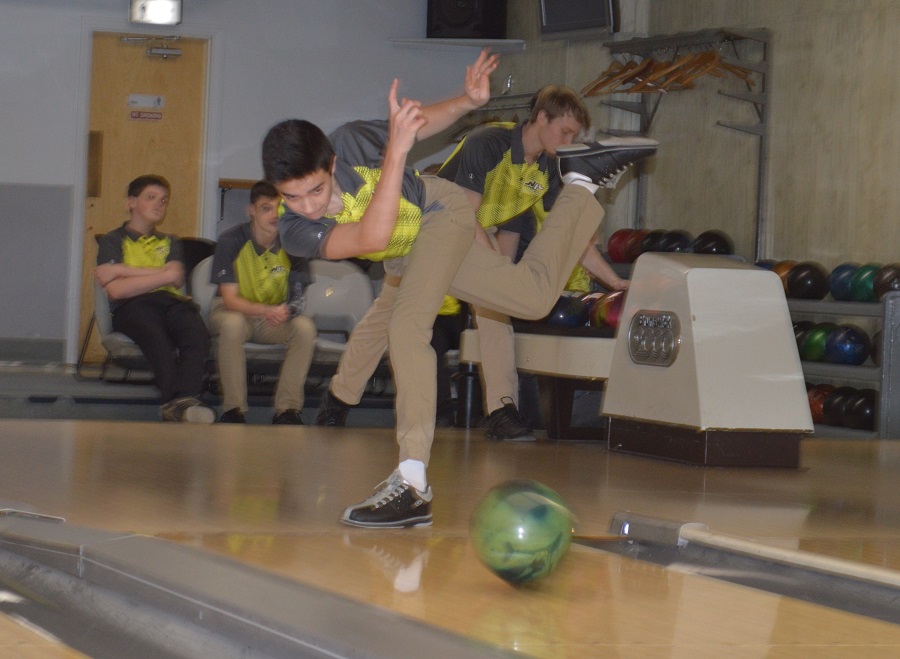 This past Wednesday, five of our NA Tiger bowlers competed at the WPIBL Boys Singles Championships at the North Versailles Bowling Center.

There were 652 boys in the WPIBL this year with 116 qualifying for the Championships. Representing North Allegheny were seniors TJ Robinson (#50) and Griffin McVay (#65), junior Alex Cook (#73), and freshmen Dylan Scheidler (#83) and Andrew Cook (#109).

As was in the Team Championships, the Route 66 sport shot oil pattern was put onto the lanes to challenge the bowlers. With the warm temperatures outside this week and the ceiling fans on full power, the oil pattern evaporated early and played differently than the team competition.

The Tigers started the first game timidly and by the end, the freshmen were leading the way with Cook and Scheidler in 57th and 61st place.  The rest of the team was packed together at 67th, 68th, and 69th.

The veteran Tigers then went on the prowl and made moves during the second game to improve their standings. TJ Robinson rolled a 216 and catapulted into 23rd place; McVay’s 207 sprung him to #33, Alex Cook’s 200 brought him just under the cut at #39.  The freshmen’s consistent play kept them in the race at #58 and #60.

The third and final game is when the mental play and muscle memory must take over as the nerves set in. Every ball thrown either takes you one step closer to your goal or sets you back.  Robinson and Cook were able to throw a 191 and 189, respectively.

At the end of the competition, only the top 40 bowlers move on to the next stage of playoff competition: the Pennsylvania State High School Western Regional Singles Championships.

Scheidler (501, 58th place) and Andrew Cook (489, 70th place) didn’t qualify to advance this year, but as freshmen made a strong showing and are expected to be back at these Championships as upper classmen.

All five of the North Allegheny bowlers will be back in action in two weeks at the Western Regional Team Competition on March 10th, where they intend to take one of the six coveted berths to the State Championships.

The WPIBL Girls’ Singles Championships were held on Thursday at Sims Lanes in Beaver Falls. There were 396 girls in the WPIBL this year with 82 meeting the average and game prerequisites to participate in the Singles event.  Sophomore, Julia Jorden (#79), was the only girl from NA to make the cut.

Jorden had a strong first game, 181, and quickly jumped into 21st place.  As the lane conditions changed, as they are known to do, Jorden started to falter in her ability to strike.  But with some resilient play, she was able to convert her spares and finish with a 138 for game 2.  This, however, dropped her ranking to 38th place and on the precipice of not making the cut.

She then began the 3rd game with two open frames, unable to convert the spares that helped her all day long.  Jorden made the necessary adjustments and started closing the all-important frames.  A strike in the 9th frame and then again to start the 10th, gave her a little breathing room.  She finished the third game with a 168 and 487 Series (34th place) and just ahead of the cut at 469 pins.

The Girls competition was very close with only 30 pins separating 20th-34th place.

Good Luck to Julia, Alex, and TJ as they move on through the Singles Playoffs. The next round will take place on Friday, March 9th at Princess Lanes in Whitehall, PA.