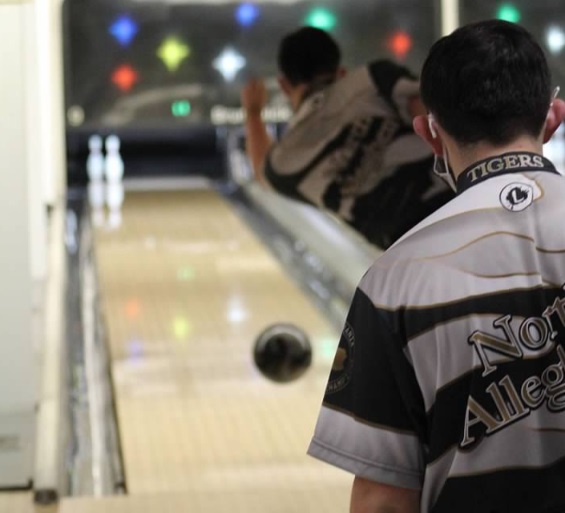 The Deer Lakes Lancers galloped into Perry Park Lanes on Wednesday hoping to battle the Tigers and ride off with a section victory and the coveted match points.  The Lady Lancers are formidable opponents, one of the top teams nor only in the WPIBL North but in the entire WPIBL organization.  Led by junior Kaylee Lipp, Deer Lakes took all 7 match points and continue to remain unbeaten in their inaugural season.  Leading NA was junior Katrina Price with a high game of 205 and the highest three-game series of 560.  Joining Price was senior Morgan Maughan; Maughan threw her highest game of the season (163) and her highest series to date, 422.  The Lady Tigers record falls to 1-6 for the season, but Price will qualify for post-season play in the WPIBL Singles Championships in February.

The boys from Deer Lakes did not fare so well against the Tigers, who were coming off their first section loss in two years.  Wounded, the Tigers went into offensive mode to squash any attack before it could start.  The joust ended quickly with NA earning all 7 match points and the resounding victory.

Out of the gate senior Gavin Rush led the charge with a Yahtzee of strikes; he was perfect through the first five frames.  Quickly adding to the assault was sophomore Cole Scott with a 4-strike hambone in frames 3-6.  Then the ham became plentiful as 4 more sets of 4 consecutive strikes were served up by the Tigers before the end of the game.  Senior Noah Sostmann took the lead role of chef serving up his first of his two hambones in frames 3-6.  Rush added one of his own, throwing a total of 9 strikes in Game 1.  Then the dynamic duo of Noah and Marc Sostmann closed the door on Game 1 with hambones for each through the 9th and 10 frames.  When the dust settled, Rush’s 268 was the highest game thrown, not only for the match, but it is also the highest game thrown by any of the bowlers in the WPIBL North so far this season.  Noah Sostmann finished with the second highest game 236.  Marc Sostmann add a 229, and Scott with a 211.  The Tigers threw a 1090 team game which was their highest pinfall thus far in the season.  NA won game 1 by a margin of +381 pins.

The Sostmanns carried over their strong finish in Game 1 into Game 2.  Noah Sostmann continued to heat up the lanes with the first turkey in the second game.  Rush is credited with the first hambone.  The Tigers were eating well early in Game 2.  The most notable talk around the table wasn’t the ham or turkey, it was the dessert the Sostmanns were baking.  Noah finished perfect with strikes in frames 7-10, known as the back 6.  More notably, Marc Sostmann superseded his brother with a 7-bagger.  Marc and Noah led all bowlers in Game 2 with a 259 and 231, respectively.  The Tigers took the second game, 981-556 and increased their total pin margin through two games to +806.

Game 3 went much the same say was the first two.  Noah Sostmann had the highest 3rd game with a 243.  Marc was close behind with a 214.  The Tigers won the third game 953-562.  For the day, NA outshot Deer Lakes by +1197 pins, and Noah’s 710 Series and Marc’s 702 Series are the two highest series thrown for the season.  Both boys sit atop the WPIBL Individual Rankings and are in contention for Section MVP.  All five varsity bowlers are on track to qualify post-season season play in the WPIBL Singles Championships.

The Boys increased their season record to 6-1.  With a win on Thursday against the Shaler Area Titans, NA can lock up first place in the WPIBL North. 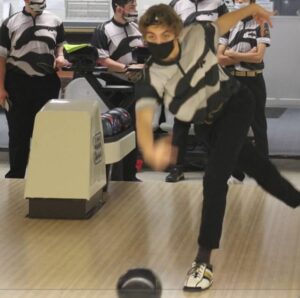 The Shaler Area Titans invaded Tiger Territory on Thursday for a make-up match that was previously scheduled and postponed due to COVID-19 quarantines.

The North Allegheny Tigers entered the match at 6-1.  Shaler has two losses on the season.  In their last meeting, Shaler was able to win the second game and challenge the Tigers in the third and decisive game.  The Tigers prevailed through, with a win today, Shaler has a chance to finish the season in first or second place.  If the Tigers win, they will lock up first place in the WPIBL North and the coveted berth into the Pennsylvania State Western Regional Championships.

Knowing that first place was in their grasp, the Tigers came out working as a unit.  Tigers hunt in streak in the wild, the NA Tigers did much the same at Perry Park Lanes.  The attack was slow and methodical with each Tiger finding their footing in the hunt.  First out of the blocks was senior Noah Sostmann., with double strikes in frames 2 and 3.  Senior Jeb Jorden added his first double in frames 4 and 5.  Sophomore Cole Scott contributed his double in the 6th and 7th frames, and senior Gavin Rush joined the skirmish was a double in frames 7 and 8.  Fresh from his season high game and high series yesterday, Noah Sostmann again took charge of assault.  In the final 6 frames of the game he threw 7 strikes, serving up a hambone and finishing with a turkey.  Senior Marc Sostmann added a hambone of his own in the final four frames.  Fittingly, the Sostmann twins ended game 1 with identical scores of 213 to lead NA to a game 1 victory, 963-842

For Game 2, junior Josh Morton started in his first varsity game and the battle with the Titans continued.  Working together the Tigers were able thwart and outlast any final push that Shaler made in their attack.  A series of double strikes and turkeys netted the Tigers the game and match victory, 888-854.

At this point in the season, the best teams in the WPIBL have bowlers who band together put forward a concerted effort in which each player plays a role and must contribute.  In Game 3, Noah Sostmann was perfect through the first four frames with his second hambone of the day.  Rush, who had the highest game in the last match, then started a strike clinic for all to marvel in the last game.  He started with four strikes in frames 3-6, then a 9-spare combo, then another series of four strikes in frames 8-10.  Rush would once again have the highest game of the match with a 246.  Also on the leaderboard from NA was Noah Sostmann with a 224.  NA was able to eclipse the 1000-pin barrier with a 1019-910 win over Shaler in Game 3.  With a total pin count of 2870 to Shaler’s 2606, North Allegheny won all 7 match points and improved their record to 7-1.  With 2 matches remaining, The Boys team has secured themselves a spot in post-season play.

The Lady Tigers put up a good fight against the Titans, but they were simply outnumbered.  All seven match points were awarded to Shaler.  With a valiant effort, junior Katrina Price threw a 164, 169, 177 for a 510-Series to lead North Allegheny.  Bring up the flank, senior Morgan Maughan bowled a 417 Series.  Adding to NA’s pinfall were juniors Ella Cullen (258) and Jenny Li (198).  The Girls team remains in 5th place with a record of 1-7.  Shaler remains in 4th place with 2 losses.  There is a close battle for the top 2 spots between four teams.

The Tigers are back in action this Wednesday for a home match against the Kiski Area Cavaliers.  The Lady Cavaliers are vying for a spot at the top of the section.