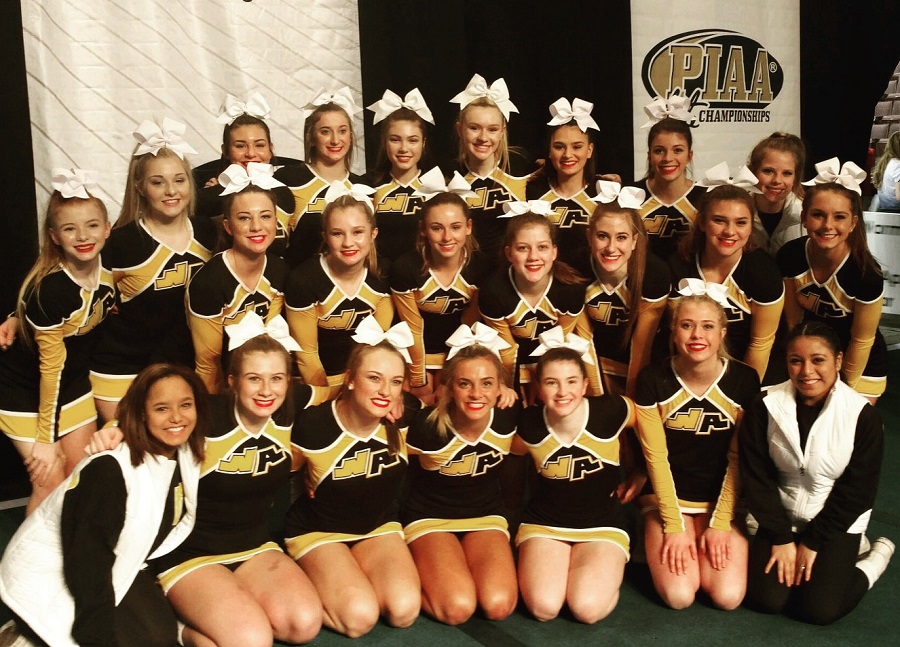 The NA Varsity Competitive cheerleaders traveled to Hershey this weekend for the 2017 PIAA Competitive Spirit Championship.   All of the district tournaments throughout PA led up to this event with nearly 120 teams competing in just four divisions for the PIAA State title.  The NA squad was competing in the Medium Varsity division against 35 other teams from around the state and it was touted as the most competitive division this year.

The preliminary round of competition included all teams vying for a chance to advance to day two of the competition.  The top 25-percent of teams in the preliminary round advanced directly into the finals round and the next 25-percent of the teams advanced to the semifinal round. The goal for the NA coaches and cheerleaders was to score high enough to move directly into the final round of competition.  As the cheerleaders performed on Friday afternoon, they had some minor mistakes, but were still feeling confident that they presented a  total package of a well-rounded routine.   When the Finalists and Semifinalists were announced, NA was advanced directly to the final round finishing in 6th overall in the preliminaries.

On Saturday, the final round showcased some of the most talented teams from around the state and proved why PA is nationally recognized as being a top state in competitive cheer.   The NA squad needed to have a near-perfect performance to break into the top five of the day given the high level of competition in the Medium Varsity category.  The team did not have their best rehearsal in the warm-up area, but the squad knew that their performance in front of the judges was the one that counts.   As the team took the floor, the level of anticipation and excitement was felt throughout the arena.  The girls performed their difficult skills with ease and their energy just kept on building as the routine went on.  The squad had their best performance of the season and felt confident that no matter the outcome, they did everything they could to score well with the judges.

The Medium Varsity awards were the last to be announced and the 12 finalist teams were waiting in anticipation for the results.   There were several teams who hit their routines, so there was talk of quite a few outcomes in awards.   As the announcer counted down from 12th place down to first, the NA cheerleaders were hoping to hear their names called as late as possible.   When the emcee announced the NA squad in fourth place, they beamed with pride that they made it this far and ranked close to some of the best teams not only in PA, but in the country.   There was a little over one point separating 2nd-4th place and the PIAA Champion in Medium Varsity was only 3 points away from the NA final score.   The top three teams were all from the Philadelphia area and NA was the highest scoring team from the western side of the state.

The 2017 PIAA Competitive Spirit Championship was one to remember as the team made an impact with the judges and proudly represented the NA community. This event will prepare the team for their final event of the season in just a few weeks.   The Varsity competitive team will travel to the UCA High School Cheerleading Championship on February 11th-12th for a chance to compete for a national title.  The squad has now shown that they can execute a near-perfect routine and they’re looking forward to making an impact on the national stage in Orlando.