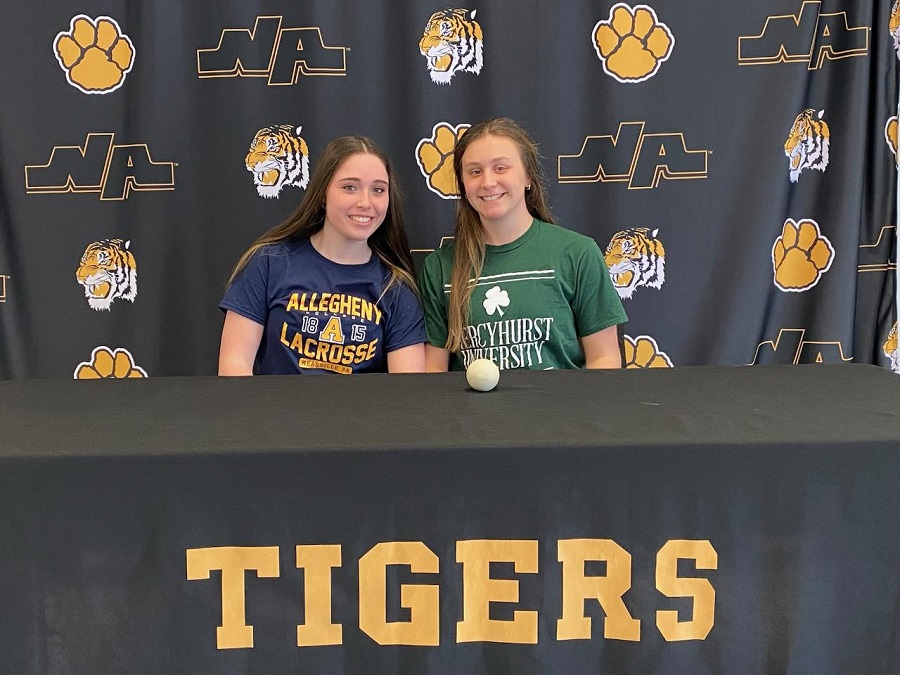 Two North Allegheny girls’ lacrosse players signed their letters of intent on Tuesday to continue their academic and athletic career at the next level. Senior midfielder Allison Lyon signed her letter of intent to play at NCAA Division II Mercyhurst University and senior defenseman Amelia Henderson inked her LOI with Division III Allegheny College in Meadville.

As a junior, Lyon earned second-team all-section laurels and scored seven goals from her midfield position. She will join a Mercyhurst team that went 10-4 last season in a truncated season due to COVID and reached the semifinals of the Pennsylvania State Athletic Conference tournament. The Lakers were picked second in the 2022 PSAC preseason poll and are 3-1 on the young season. Lyon will major in Sports Medicine at Mercyhurst.

Henderson helped anchor the North Allegheny defense last season and chipped in to the offensive output with five goals. She will join an Allegheny team that is already off to a 4-0 start to the season under first-year head coach Patty Pehnke. The Gators will join the Presidents’ Athletics Conference next season. Henderson will major in Education Studies at Allegheny.

Both Lyon and Henderson were members of a North Allegheny team last season that went 15-4 and reached the WPIAL quarterfinals before bowing out to eventual Class AAA champion, Shady Side Academy. The Tigers will open the 2022 season on Friday, March 25 at home against Upper St. Clair.