The North Allegheny Hall of Fame is in its 23rd year honoring former student-athletes, coaches, and administrators for athletic excellence.  Since 1997, North Allegheny has inducted 209 individuals, which includes the Class of 2019, inducted last October. 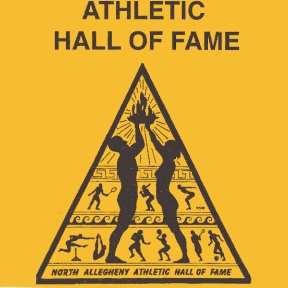 Each association member is permitted to nominate one former student-athlete, coach, or administrator annually.  These forms may be obtained from the Office of the Director of Athletics.  Each ballot is reviewed by the  Hall of Fame Committee and submitted to the membership for voting.  Association by-laws reflect eligibility requirements, number to be elected, etc. The Nomination Application must be turned in by January 5 of each year.

The Association is proud that all funds raised have been donated toward District projects such as the Hall of Fame Room located in south lobby of the Baierl Center (formerly known as the Center of Excellence), the NA Athletic Department website, the NASH baseball/softball lighting project, the locker room in the Baierl Center, and the Hall of Fame Room in the lobby of the high school, among others.

To become a member of the Hall of Fame, contact Bob Bozzuto at bbozzuto@northallegheny.org: