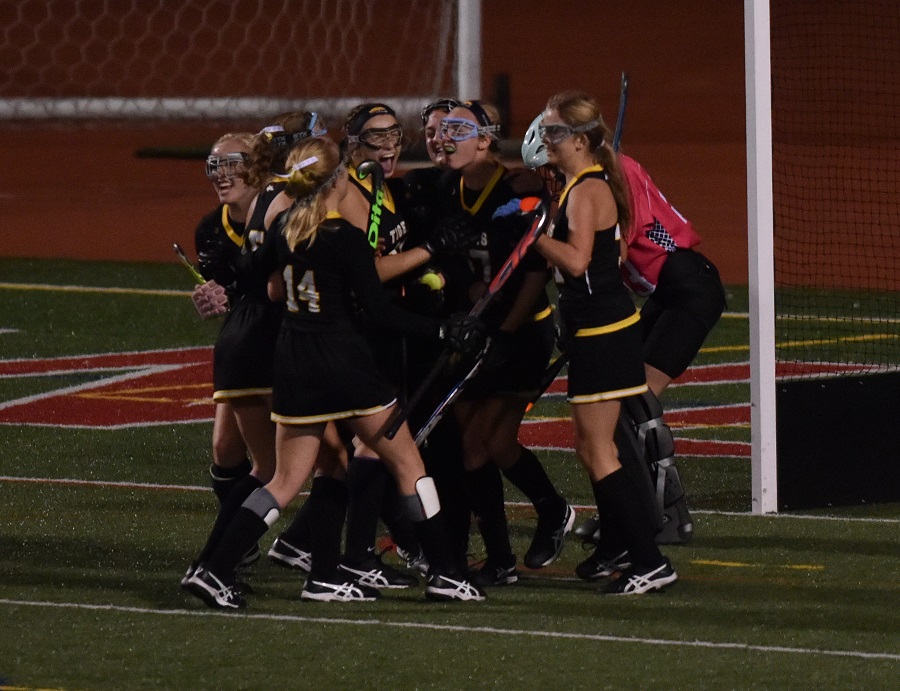 NA Edged In WPIAL Semifinal By Pine-Richland In Shootout, 3-2

The North Allegheny field hockey team took reigning WPIAL champion Pine-Richland to the limit, but the Rams survived the Tigers in the WPIAL semifinals with a 3-2 shootout victory. The Tigers trailed 2-0 at halftime but stormed back in the second half to force overtime. After two scoreless 15-minute overtime periods, the game was decided in a shootout and the Rams held a 3-2 edge in strokes to punch their ticket into the WPIAL championship game on Monday, Oct. 29 at Fox Chapel High School.

Facing each other in the playoffs for the second straight year and third time in the last five years, North Allegheny and Pine-Richland played in an instant classic at neutral site, Peters Township. The Rams gained the early edge with a goal from sophomore Jordan Landreneau 5:29 into the game. Landreneau struck again with 9:34 remaining in the first half to give Pine-Richland a 2-0 advantage.

In the second half, the Tigers displayed their resolve and mettle and turned the tables on the Rams. On a long hit into PR territory, a rare misplay by the Rams defense allowed sophomore Marisa Hess an opportunity in the circle and she cashed in with 24:45 on the clock, trimming the PR lead to 2-1. The goal was Hess’ sixth of the season.

The Tigers remained in hot pursuit of the Rams throughout the remainder of the half and were granted a golden opportunity with just 48 seconds to play. Given a penalty stroke, senior Bridget Russell beat Rams goalie Abby Baratka for the equalizer and the game was knotted up, 2-2. For her clutch play throughout the night, Russell was named the Wright Automotive Player of the Game.  Russell’s goal was her 11th on the year.

In both overtimes, North Allegheny had the better of the scoring chances. Senior Angie Genter was narrowly denied by Baratka who made a glancing save on a shot with 8:10 to play in the first OT. Later in the overtime, a deep pass nearly found junior Hailey Wachowiak all alone in the circle but narrowly missed her stick.

After two scoreless overtime periods, the playoff drama advanced into a penalty stroke shootout. Before the penalty stroke session began, Abby Baratka was forced to leave the game due to an apparent lower-body injury. Freshman Sadie Baratka took over for the Rams with a trip to the WPIAL championship game at stake.

The Tigers immediately took advantage of the freshman keeper as Hess scored to give NA a 1-0 advantage in strokes. After a pair of stops by each goalie, PR’s Ava Loskoch scored to even things up at 1-1. Russell responded immediately with a marker to vault NA in front again in strokes, 2-1. Unfortunately for NA, Sadie Baratka did not allow another goal and PR’s Alexa Sharon and Elaina Camino scored on back-to-back strokes to lift the Rams to a 3-2 edge in strokes and a 3-2 victory in the WPIAL semifinals.

Pine-Richland held a 7-6 advantage on penalty corners on the night. NA goalie Kali Kugler made nine saves and did a terrific job in holding the Rams at bay in the second half. Collectively, the Tigers defense was outstanding in limiting the quick-footed stride of PR’s Ella Rottinghaus, keeping her scoreless on the night.

North Allegheny’s season comes to an end with a 10-7-1 overall record. Congratulations to head coach Trish Herbert, her coaching staff and the entire NA field hockey team for a memorable season and valiant effort in the playoffs.