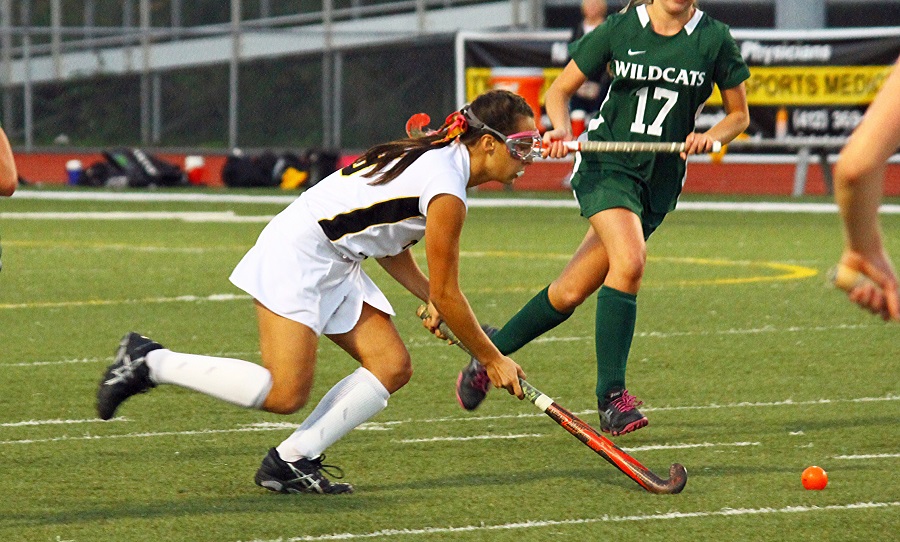 NA’s field hockey team challenged Novi High School (Michigan) to a duel at Newman Stadium on Friday evening. The Lady Tigers exhibited a well-balanced game, resulting in a 3-0 victory, following strong play by both the offensive and defensive units.  The teams appeared evenly matched for much of the first half, as the play was maintained mostly between the 30 yard lines.  At about eight minutes into the contest, junior Jessica Brandon would open the scoring by racing downfield and blasting a shot between the pads of Novi’s goalie to put the Tigers on the board 1-0.  The game continued to go back and forth until junior Megan Guzzardi stole the ball from a Novi player at the midfield, and with a strong individual effort, streaked down the field and crossed the ball in front of the goal.  Brandon picked up the cross, making a quick pass to senior Briget Zehr, who poked the ball into the net to expand NA’s lead by two.

Less than two minutes into the second half, NA was on the board again, for the third and final tally of the night.  During a penalty corner that was awarded to NA, junior Kailey Vogl would cross the ball through traffic from the right of Novi’s goalie.  Brandon would pick up the pass and lift the ball into the net, setting the score at 3-0.  The remainder of the half was more of a full-field contest.  The game seemed to open up with both teams rushing up and down the turf without scoring, though there were several good scoring chances.  Novi was turned away numerous times by the constant strength of this Tigers team, the midfield juniors Hannah Downing, Megan Guzzardi and Nicole Burns.  Novi would make its only serious threat on their fifth and final penalty corner of the evening, with a shot that was blocked by senior Morgan Mendenhall.  With a strong overall effort, NA’s defenders, juniors Abby Genter and Kendra Downey, and seniors Liza Pucciarelli and Veronica Iriart cleared the ball each time Novi pressed into Tiger territory, and the contest would end with another NA shutout.