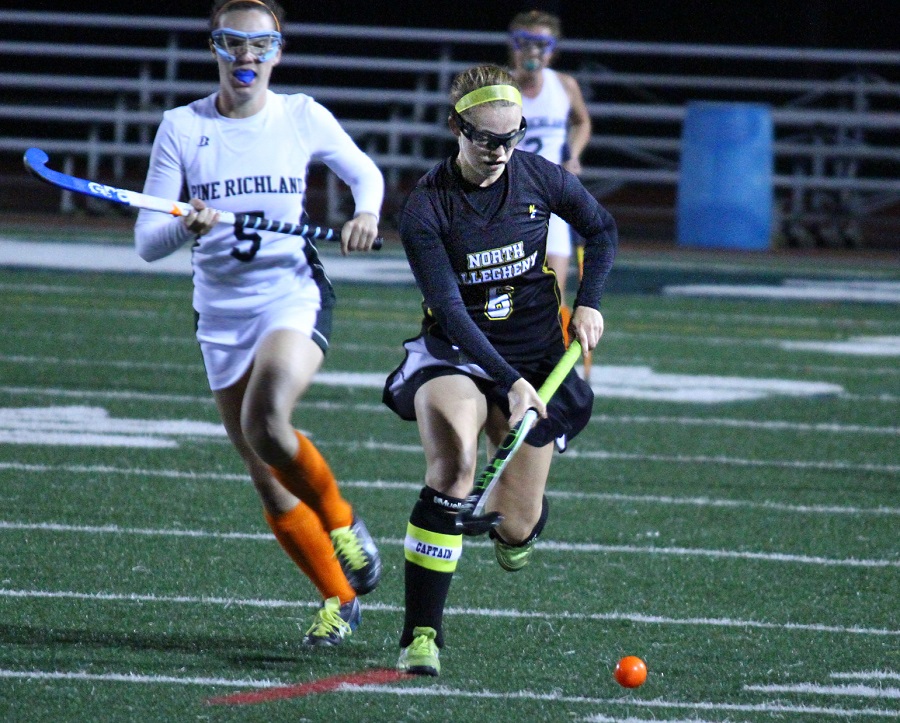 The Lady Tigers dealt a blow to Pine Richland on Monday evening, breaking free of the Rams to move ahead as the only undefeated team in AAA Section 1 field hockey. Throughout the season and again in tonight’s game, the Tigers displayed strong stick skills, endurance and team unity, and they continued to show their dominance in the section by downing the Rams 4-1.

The game was fast-paced from start to finish, with quick passes and long runs down the sidelines. The Tigers generated some good offensive chances in the opening minutes, earning a few penalty corners and registering several early shots on goal.  Senior Jessica Brandon would put the Tigers on the scoreboard first, when she received a pass from junior Maddy Snyder in the center of the circle, and put a wrist shot under the Rams goalie to go ahead 1-0 just 7 minutes into the game.  The Rams would not back down, pressing into the Tigers defensive zone and earning a penalty corner just four minutes later, then tying the game on a tip in from senior Sage Dowiak.  However, the Tigers would earn a penalty corner near the end of the half, and a second and third corner would be called after time had expired, allowing midfielder Nicole Burns to take a shot that drove into the net from the left side and put the Tigers up 2-1 at half time.  Although the Tigers gave up their first goal in section play this year, they allowed only two shots on goal and one penalty corner, all of which were registered in the first half.  In the Rams end, the Tigers placed 10 shots on goal and earned 8 corners in the half.

The Tigers opened the second half playing aggressive, high-energy hockey. Around eight minutes into the half, Brandon would receive a tripping call that sat the forward for 5 minutes.  Despite playing a man down, the Tigers were able to keep the play in the midfield for much of the penalty.  The half would continue with frequent exchanges of possession, the Tigers team being aided by strong play from the midfielders and half backs, who were able to channel the Rams toward the sidelines and feed NA’s offensive rushes.  Still up by only one goal with four minutes remaining in the game, the Tigers would keep pressing to take a stronger command of the scoreboard.  During a Tiger penalty corner, Burns, on the right side of the circle, would feed the ball to junior Maddy Snyder who was stationed just a few yards out from the center of the goal.  Expecting a shot from Burns, the Rams goaltender pulled to her left, leaving Snyder open to flick a quick shot that appeared to be saved by a Rams defender, but had crossed the line, putting the Tigers ahead by 2.  The final tally would come less than two minutes later, when Brandon sailed down the right side toward the net, and crossed the ball into the middle from just short of the goal line.  Senior Kailey Vogl would receive the pass and quickly send a wrist shot into the net to solidify the Tiger win.  NA would register 8 shots on goal and force 4 corners in the second half.  The tigers seemed to gain momentum throughout the second half, completely shutting down Rams offense and denying the Rams of any shots on goal or penalty corners.

The Rams will have a chance to face the Tigers when the teams meet again at Newman Stadium on October 14th.  In the meantime, the Tigers host Norwin on Thursday at 7:00 pm (JV 5:30) then travel to Hershey for two Saturday games, including a match against one of last year’s top teams in the state, Lower Dauphin.