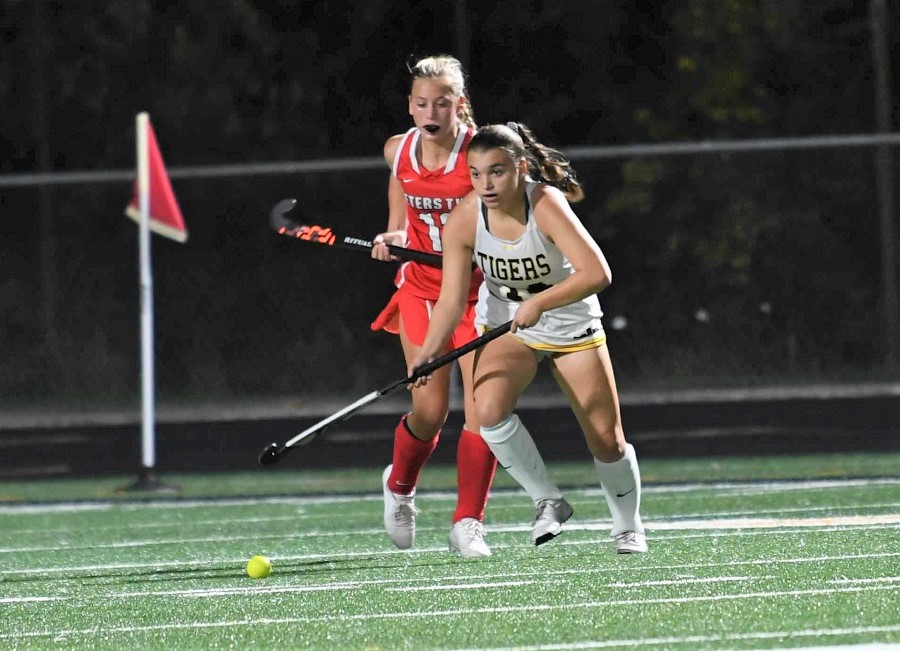 After falling to Peters Township 1-0 earlier in the regular season, head coach Michelle Couch thought being able to finish would be a key in the rematch against the Indians. The chances were there for North Allegheny, but the finishes were not in a 3-1 loss to Peters Township at Newman Stadium.

Sofia Forlini found a loose ball that snuck behind North Allegheny’s Jordan Ashbuagh on a penalty corner and nudged the ball into the net for a 1-0 lead.

The Tigers answered on their own penalty corner 1:08 later, when Claire Cho scored her first goal of the season tucking one in at the near post to tie the game at 1-1. North Allegheny would continue to press he attack in the first half, finishing with sixteen total corners, but the Peters Township defense was stout throughout as was sophomore goalkeeper Grace Urban who finished the night with twelve saves.

Just over three minutes into the third quarter, the Indians took the lead for good. Ava Zimmer, who handled the inserts for Peters Township, snuck to the net and deposited a rebound to make the score 2-1. Anna Kokoszynski then converted a penalty corner with a well struck reverse chip at 7:40 to put Peters Township ahead 3-1.

The Tigers would have chances to try and tie the game in the fourth quarter, but the Indians defense and Urban closed the opportunities down to secure the win and pull within 3 points of North Allegheny in AAA Section 1. The Tigers are off until Monday when they hit the road to face Hempfield in an important section matchup.

The Wright Automotive Player of the Game honors went to Claire Cho. Not only did the sophomore forward scored the game’s only marker for North Allegheny, but the goal was also her first career varsity tally as a member of the Tigers.