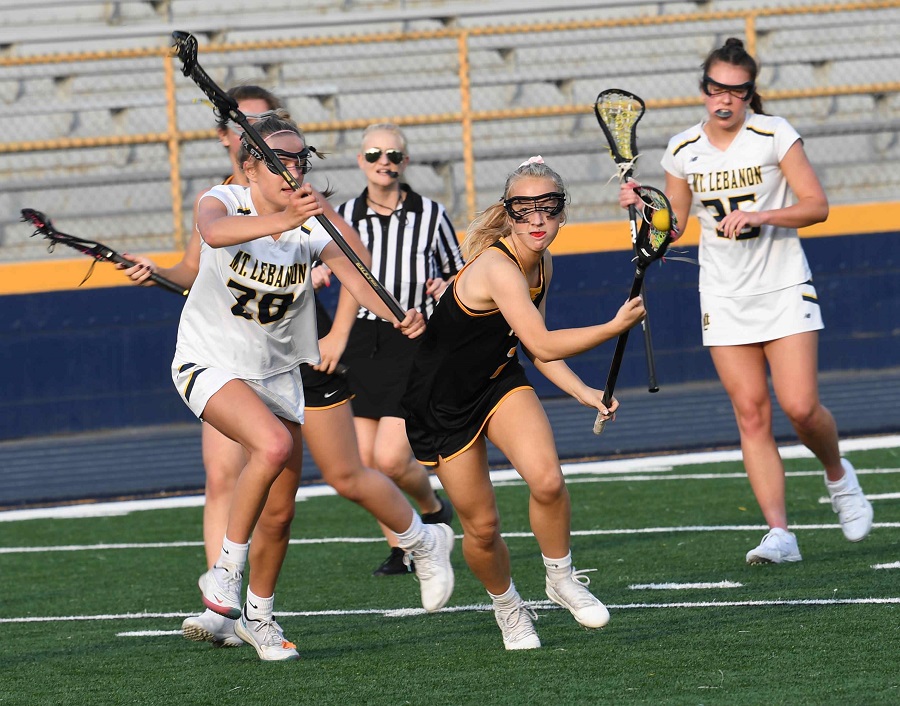 After a competitive first half, the Mt. Lebanon Girls Lacrosse program pulled away down the stretch to beat North Allegheny 16-8 in a WPIAL 3A Quarterfinal from Mt. Lebanon High School Thursday.

An early free position goal from Tegan Hoover set the pace for the Blue Devils, but senior Bella Falo struck back four minutes later to even the score. NA took their first of two leads in the game at 17:26, when Falo set up junior Mila Prusak to take the 2-1 lead. Hoover scored just seven second later to tie the game once again. The back and play continued in the first, as senior Allison Lyon propelled the Tigers ahead again with 12:54 left in the half. Hoover netted a hat trick to tie the game, and Reagan Murdoch scored the first of six goals in the contest to give Lebo a 4-3 advantage. North Allegheny senior Emma Lafayette took a feed from Lyon to knot the game up with 7:39 left in the first. Addie Murdoch scored the first of three goals with 3:24 remaining in the half, and almost scored another before the horn sounded. The officiating crew waved off the shot and the Blue Devils carried a 5-4 lead into halftime.

North Allegheny kept momentum going, as Prusak scored quickly to tie the game at five apiece just a couple of minutes into the second half. Mt. Lebanon then rallied and scored nine straight goals to take a commanding 14-5 advantage with 8:28 remaining. Prusak broke up the scoring streak by the Blue Devils and also notched the final two goals of the game with less than three minutes left on a running clock.

The Tigers Girls Lacrosse Program ends another successful season with an 11-7 overall record. Congratulations to Coach Harry Datz and the team on a third consecutive WPIAL Playoff appearance.