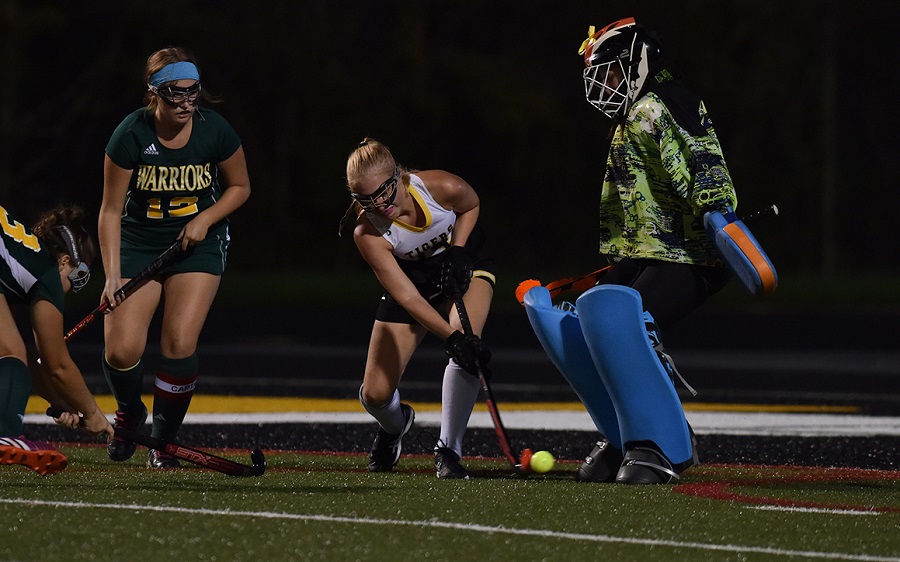 Spearheaded by two goals and an assist from junior Hailey Wachowiak, the North Allegheny field hockey team prevailed over the Penn-Trafford Warriors on Thursday night, 4-0, at Newman Stadium. It was a dominating effort as NA held the Warriors without a shot for the entire game, outshooting PT, 11-0. The win was the 13th in a row for the Tigers in their head-to-head series with the Warriors.

North Allegheny wasted little time bursting onto the scene as Wachowiak scored the first goal of the night just 33 seconds into the game for a 1-0 lead. Despite continued pressure from the Tigers throughout the remainder of the first half, NA’s advantage stayed at one goal by intermission.

In the second half, the Tigers scored twice in the first eight minutes to take command of the game. Sophomore Marissa Hess, assisted by Wachowiak, beat Penn-Trafford goalie Samantha Doherty with 24:30 on the second half clock for a 2-0 lead.

The NA advantage swelled to 3-0 with 22:12 to play when Wachowiak scored her team-leading ninth of the season, and second of the night, on a re-direct from senior Laura Schwendeman. For her efforts, Wachowiak was named the Wright Automotive Player of the Game.

The Lady Tigers put the finishing touches on the win when senior Trystan Laughrey sent a pass from the right wing into the circle that was tipped into the net by sophomore Ella Strzempek for a 4-0 lead with 12:56 remaining in the game.

With the win, North Allegheny improves to 6-2 on the season. Penn-Trafford slides to 1-4 overall. The Lady Tigers will take part in the Palmyra Cougar Classic on Saturday beginning at 9:00 a.m.