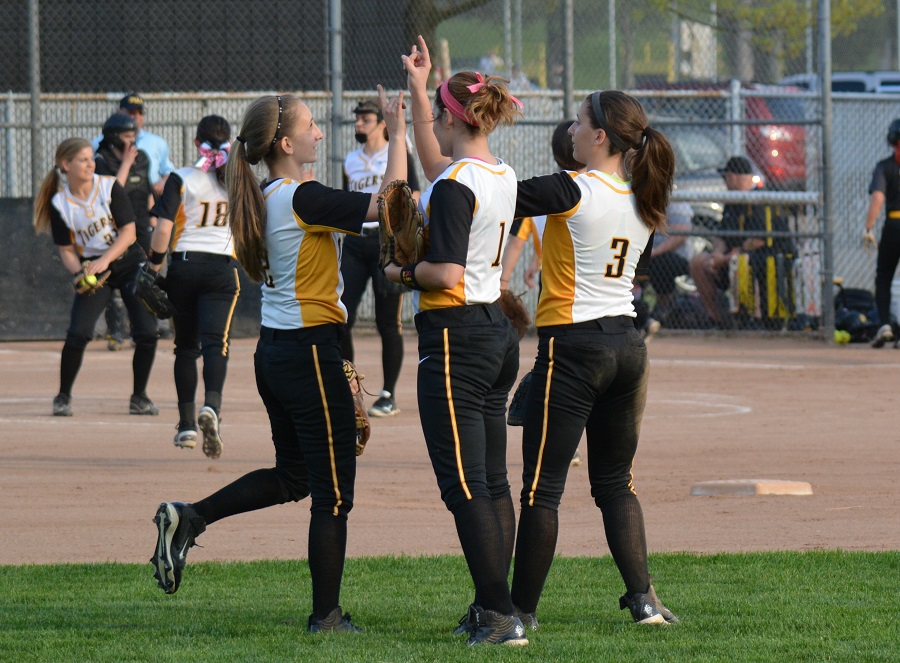 The North Allegheny Tigers are California bound after defeating Baldwin, 5-1, on a chilly Thursday afternoon.  Baldwin jumped out to a 1-0 lead in the second inning, collecting three straight hits after one out.  Charlotte Nieman doubled, followed by a Samantha Wampler infield single to move Nieman to third. Then Carly Santillo bunted a ball over the head of pitcher Madi Beining for an RBI single.  Baldwin loaded the bases but could not score again in the inning.

Baldwin pitcher Jamie Schliecher retired the first seven batters she faced but served up a solo home run to Erika Jelinek over the left field fence and the game was tied, 1-1.  Jelinek was named the Wright Automotive Player of the Game as her home run jump started the Tiger offense.

North Allegheny tallied two runs in the fourth inning when Emily Hogan led off with a single and was sacrificed to second. With two outs, Logann Woodley hit an RBI single to give the Tigers a 2-1 lead.  Schlecher walked the next three batters to force in another run and North Allegheny had 3-1 advantage.

The Tigers scored two more runs in the fifth receiving an RBI single from Liz Scherer and a RBI ground out from Beining and that was all North Allegheny needed.  Baldwin threatened in the seventh inning by putting the first two runners on but could not score.  Beining pitched a complete game, scattering five hits and striking out six.  Baldwin will now face Shaler for a spot in the upcoming PIAA playoffs and North Allegheny will take Hempfield next Thursday at 7 pm in the WPIAL Championship Game at Lilly Field on the Campus of Cal-U.