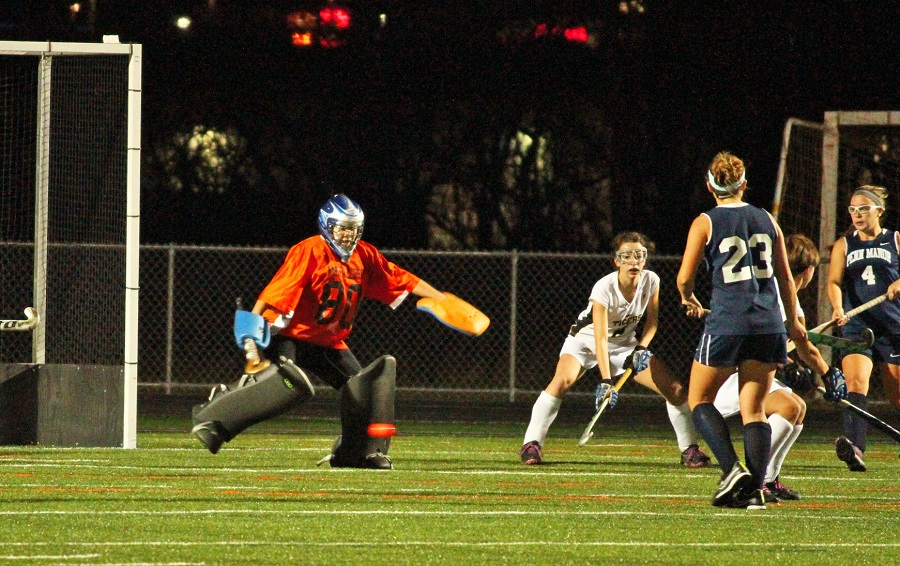 The North Allegheny Field Hockey Team went toe to toe with Penn Manor from powerful District 3, dropping a narrow 2-1 decision in the opening round of the PIAA playoffs. The Tigers were eying their first ever state playoff victory and hung tough with Comets in a contest played a Latrobe High School’s Rossi Field.

In the first half, Penn Manor garnered three consecutive penalty corners seven minutes into the game and nearly cashed in on a scramble in front of the net, but a shot from junior Madison Warfel hit the crossbar and the game remained scoreless. Penn Manor had a huge advantage in penalty corners on the night, 16-4.

After weathering the early storm from the Comets, North Allegheny and Penn Manor played a fast-paced game that saw each team exchange trips into enemy territory. Unfortunately for the Tigers, it was the Comets who owned the better of the scoring chances and PM finally touched the scoreboard with 11:30 to play in the first half. Sophomore Brooke DeBerdine scored an unassisted goal on the third shot off a penalty corner to give the Comets a 1-0 lead. The first two shots off the penalty corner were saved by Tigers goalie Katie Shideler, but the third shot was the charm for DeBerdine and Penn Manor.

In the second half, the Comets commanded the first 15 minutes of play and took a 2-0 lead when DeBerdine netted her second goal of the night, and 10th of the season, at the 8:39 mark of the half.

The WPIAL champion Tigers refused to go away quietly, and following a timeout by head coach Maddy Berkley, played with more fervor over the final 10 minutes of action. The NA defense, receiving a strong night from Kendra Downey and Megan Guzzardi, prevented any additional goals from the Comets for the remainder of the game. Sophomore goalie Katie Shideler got the start for NA and made nine saves, further limiting Penn Manor’s ability to score. The Tigers offense was able to push a goal past PM’s Allison Shaefer with 14 seconds left in the game when Kailey Vogl scored off a penalty corner, courtesy of an assistant from Nicole Burns, to bring the final score to 2-1, Penn Manor. For scoring NA’s only goal of the night, Vogl was named the Wright Automotive Player of the Game.

North Allegheny finishes the year with a 17-4 overall record and a second straight WPIAL crown. Congratulations to the Lady Tigers and coach Maddy Berkley and her staff for a terrific season.

Penn Manor improves to 22-4 overall and advances to the PIAA quarterfinals on Saturday.